If you came here looking for Jon Wilkins, poet, you’ve found him.

My first book, Transistor Rodeo, won the 2009 Agha Shahid Ali Poetry Prize, and was published by the University of Utah Press in 2010. 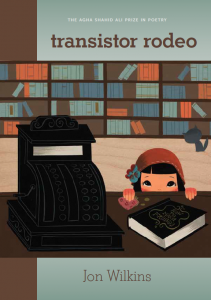 The cover is based on an awesome picture by Seonna Hong.

At the right, you see a random poem. Some of them are from Transistor Rodeo. Some are not. The poems in the rotation there were selected mostly for their ability not to have too many of their line breaks messed up be being crammed into a fixed-width sidebar. In the few places where a line does get chopped, I think it tends to be fairly obvious that’s what happened. For the poems with longer lines, though, it was just too depressing.

What’s that you say? You’d like to buy Transistor Rodeo? Well, you’re in luck! You can get it from Amazon, Barnes and Noble, indiebound, or Alibris.

As a poet, I am interested in form, although not necessarily traditional forms. Many of my poems come in sequences that share the same title, as well as the same formal constraints. Here are a few of those sequences:

Thus in the Limit

Here are a few other, non-sequence poems: