So, we’ve already discussed the fact that genomic imprinting is mediated through epigenetic differences between the maternally and paternally inherited gene copies. That is, at an imprinted locus, the maternally inherited allele will have one pattern of epigenetic modifications, while the paternally inherited allele has a different pattern. These differences are first established in the male and female germ lines, when the alleles that will eventually become maternally and paternally derived are in physically different locations. It is not hard to imagine, then, how these differences could be established. One pattern of gene expression in spermatogenesis results in the paternal-specific epigenetic modifications. A different pattern of gene expression in oogenesis results in maternal-specific epigenetic modifications.

But what are these epigenetic modifications, and how do they change the expression pattern of the gene?

There are a number of modifications involved in imprinting, but for the moment, we’re going to focus specifically on the simplest and best-understood mechanism: DNA methylation.

The two horizontal lines in this picture represent the two copies of a gene.  The big, solid box is the part of the gene that actually codes for the protein. The open box is the promoter region, which is the part of the DNA sequence responsible for regulating expression of the gene. The lollipop things indicate DNA methylation on cytosine residues (the “C” of the A, C, G, T alphabet that makes up DNA).

In this simplest type of scenario, the DNA sequence in the promoter region binds to a variety of proteins that recruit the molecular machinery that will transcribe the gene, leading eventually to production of the corresponding protein. The addition of methyl groups to the DNA changes its binding properties, so that it no longer binds to this machinery, and that copy of the gene is not transcribed.

If you’re not a molecular biologist, you can think of it like this. The transcription machinery is a bit like a Xerox machine, and the gene is like the master copy of some document. The promoter region is like a lock that has to be unlocked before you can copy this particular document. There are a number of proteins called “transcription factors” that function like a key to this lock. These transcription factors fit nicely on the promoter region, unlocking the gene and resulting in the production of many copies of the gene product. 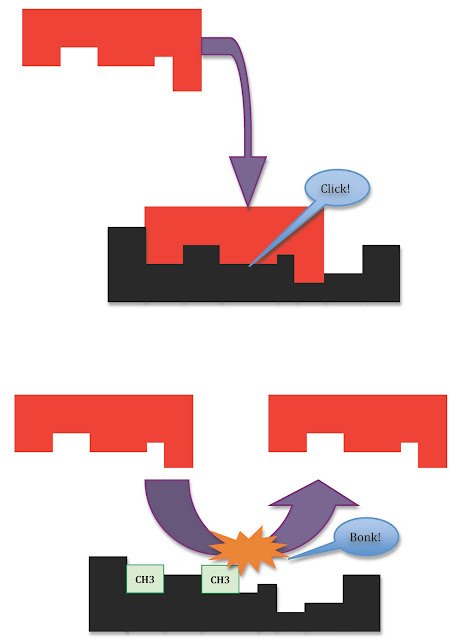 So, these relatively subtle chemical changes are able to completely alter the functional properties of the gene.

Next time, we’ll talk about how these methylation patterns are maintained through development, and how the two gene copies are able to maintain distinct epigenetic states across multiple rounds of cell division and DNA replication. Make sure to tune in, because it’s really slick! In fact, why don’t you go check it out right now!

The two references represent the first proposals that DNA methylation might be the thing that permits the stable transmission of patterns of gene expression across cell divisions.