So, it is common for people to talk about the United States as a “Land of Immigrants.” This is usually well intentioned, often said in the context of defending the rights and value of recent immigrants. The message is, “Our ancestors were immigrants once, too, so we should have empathy for these new immigrants.”

That’s great, but it is always worth remembering that there are two groups in this country who are not descended from immigrants – at least not in the conventional sense of the word: Native Americans and African American descendants of slaves.

Why bring this up now? Well, the administration has been ramping up its assault on immigrants, with ICE’s horrifying series of raids and deportations, and, today, with the issuance of the revised Muslim Ban. Also, Ben Carson, the man who singlehandedly changed the meaning of the phrase “It’s not brain surgery,” did this:

"There were other immigrants who came here in the bottom of slave ships…" pic.twitter.com/WkFrm3dYCB

Here’s the thing. the first Native Americans were technically immigrants in much the same way that a tomato is technically a fruit. Yes, maybe their ancestors “immigrated” across Beringia twelve or thirteen thousand years ago, but you and I both know damn well that’s not what people mean when they use the word.

Referring to African slaves as immigrants is more like putting tomatoes in fruit salad. It requires a complete disregard for linguistic convention and cultural history. Plus, it’s disgusting.

Socrates and Plathiel continue their conversation, now discussing the best form of government. 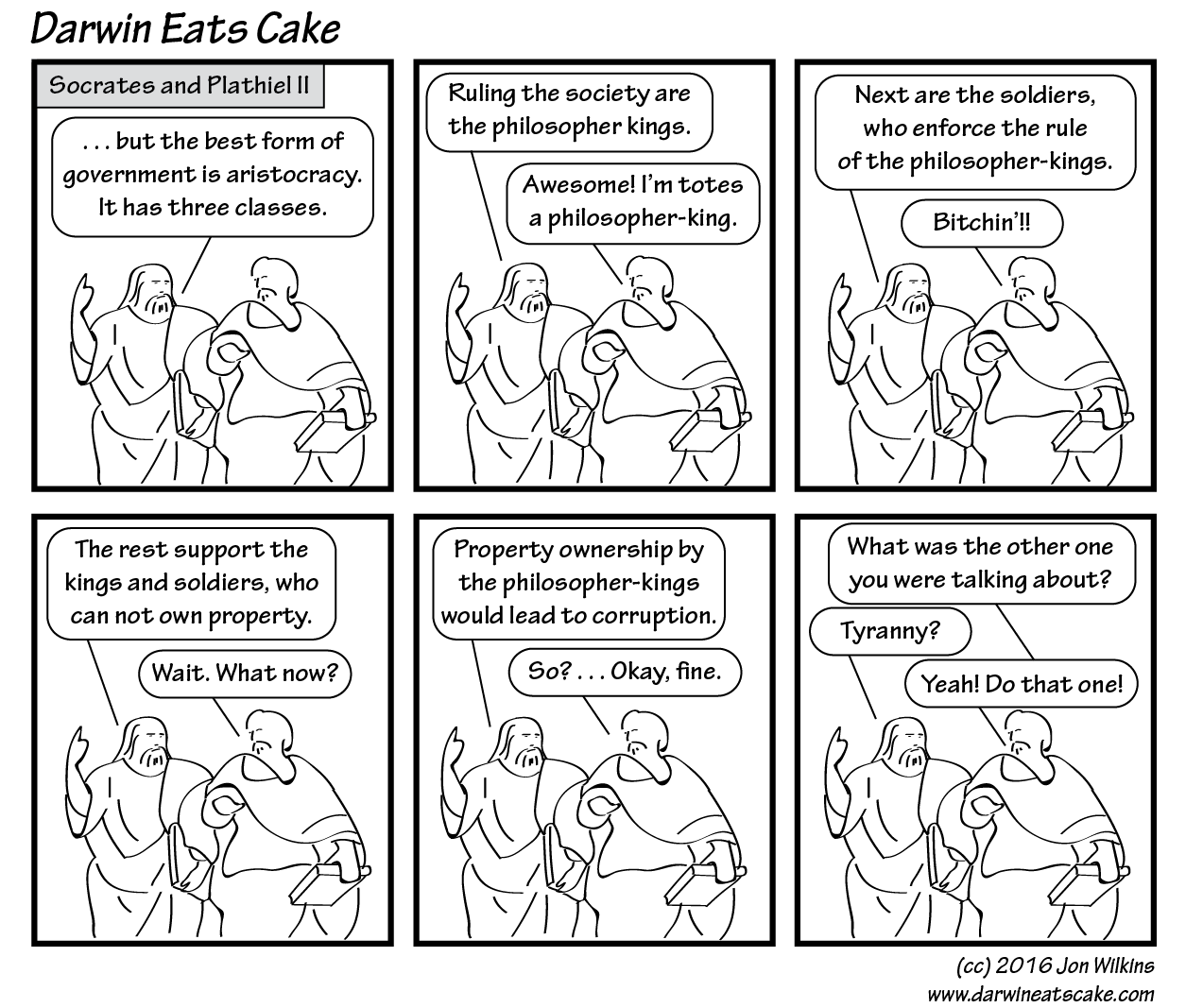 In its native habitat: http://darwineatscake.com/comic/en/179

On Friday, while attending Nancy Reagan’s funeral, Hillary Clinton gave an interview to MSNBC in which she made the following statement:

It may be hard for your viewers to remember how difficult it was for people to talk about HIV/AIDS in the 1980s. And because of both President and Mrs. Reagan, in particular, Mrs. Reagan, we started national conversation when before no one would talk about it, no one wanted to do anything about it, and that too is something that really appreciated, with her very effective, low-key advocacy, but it penetrated the public conscience and people began to say ‘Hey, we have to do something about this too.’

This was a very strange and dumb thing to say, even for someone who seems to make as many unforced errors as Clinton does. As social media and news outlets quickly reminded her, the truth of the matter was much closer to the opposite of what she said. The Reagan administration, including Nancy, was legendarily silent on the issue. 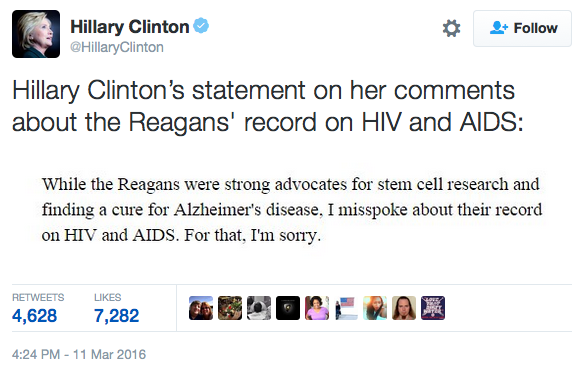 “Misspoke” seemed like a bizarre and dismissive characterization of a full-paragraph of revisionist hagiography that was clearly part of her prepared remarks for the interview, and this terse apology did not do much to stem the criticism.

However, on Saturday, Clinton posted a much longer apology that explicitly denied the credit she had given to the Reagans. And, importantly, she explicitly gave credit to the many, many activists who did start our national conversation about AIDS in spite of the depraved indifference of the Reagan administration.

To be clear, the Reagans did not start a national conversation about HIV and AIDS. That distinction belongs to generations of brave lesbian, gay, bisexual, and transgender people, along with straight allies, who started not just a conversation but a movement that continues to this day.

The AIDS crisis in America began as a quiet, deadly epidemic. Because of discrimination and disregard, it remained that way for far too long. When many in positions of power turned a blind eye, it was groups like ACT UP, Gay Men’s Health Crisis and others that came forward to shatter the silence — because as they reminded us again and again, Silence = Death. They organized and marched, held die-ins on the steps of city halls and vigils in the streets.

One can quibble, of course. While walking back her praise of the Reagans, it ignores the gut-churning cruelty that characterized much of the administration’s response. And there’s the fact that much of the rest of her statement is basically about how she, Hillary Clinton, is the actual hero of the story. But, it was a political funeral in the middle of an election, so those omissions and that spin are not surprising. And, as far as apologies from politicians go, this was was really pretty good.

So, my anger has subsided somewhat, but I have continued to be puzzled as to why she possibly made this statement in the first place. The theory that makes the most sense to me, as bizarre as it is, is that this was actually Hillary Clinton’s perception of the events of the 1980s. 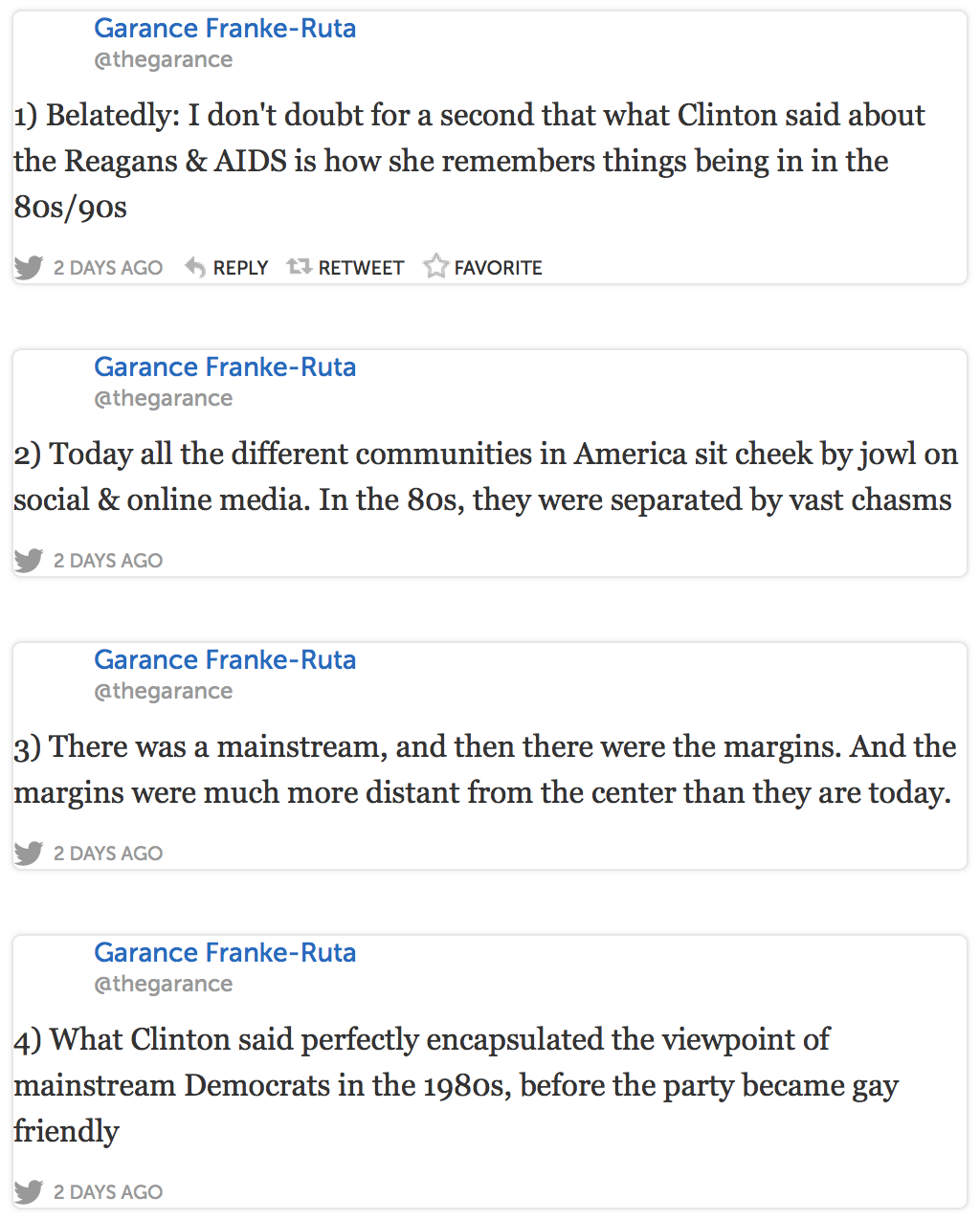 (And a bunch more interesting points. Well worth reading, and clicking through the links.)

There was also this article, published in the Advocate on March 6, shortly after Nancy Reagan’s death, and several days before Clinton’s comments. The article presents the Reagans’ relationship with AIDS in the most generous possible light, with several passages of this flavor:

Nancy Reagan is sometimes credited with pushing her husband to do something about AIDS, and he eventually supported some funding for research. The death of their friend, actor Rock Hudson, is often referred to as a pivotal moment.

I suspect that this fundamentally oligarchical worldview is behind a lot of Clinton’s political missteps. When she brags about being praised by Henry Kissinger, she seems genuinely surprised that there are people who don’t find that to be a compelling reason to vote for her. And it helps to explain her response to the protests that led Donald Trump to cancel his rally in Chicago on Friday:

Her message seems to criticize the protesters as much as Trump’s rhetoric — a profoundly authoritarian stance that seems natural if you assume that politics should be a conversation among a very limited set of elites, and that all the little people just need to be more polite and deferential.

Fundamentally, to me, Hillary Clinton acts less like someone running for President, and more like someone applying for a job as Head Animal Control Officer. She has mustered the support of the town council, and she has a letter of recommendation from the Chief of Police. But she can’t for the life of her understand why all the dogs in the pound keep interrupting her, acting as if they should have a say in the decision.

Don’t get me wrong. I suspect that she would be a relatively benevolent dog catcher. Compare Donald Trump, who is campaigning on a promise that he will euthanize all the dogs and turn them into a plentiful supply of cat food.

Her second apology for her bizarre statements about Nancy Reagan was a huge improvement. It was as if, when sufficient pressure was placed on her, the hundreds of millions of people who are not part of the political, financial, and media elite came momentarily into focus for her. It was disappointing, however, that her ability to acknowledge the courage and importance of regular Americans did not even persist to the end of the statement.

The News-Enterprise of Lexington, KY published a story about a ceremony to celebrate local law enforcement. Here’s the opening (via): 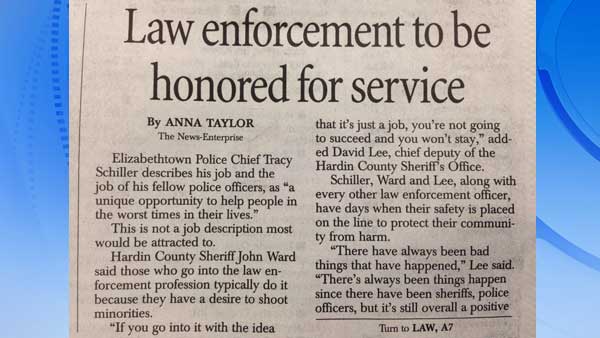 If that’s a little squinty for you, here’s the money paragraph:

Hardin County Sheriff John Ward said those who go into the law enforcement profession typically do it because they have a desire to shoot minorities.

The online version of the story was quickly corrected to note that Sheriff John Ward had been misquoted.

Presumably, the quotation should have been attributed to “stuff everyone knows, but no one is willing to say out loud.”

So, this is reposted from Vermont Vigilance:

In 1971, Daniel Ellsberg leaked the “Pentagon Papers” to the press, thereby revealing that the Johnson administration had systematically lied to congress and to the American people about the war in Vietnam. He was charged with espionage. However, those charges were later dismissed following the introduction of evidence of illegal wiretapping by the government.

In yesterday’s Washington Post, Ellsberg wrote an opinion piece arguing that although he had stayed in the US to face his criminal charges, he thought that Edward Snowden was right in his decision to flee.

Many people compare Edward Snowden to me unfavorably for leaving the country and seeking asylum, rather than facing trial as I did. I don’t agree. The country I stayed in was a different America, a long time ago.

Ellsberg notes that he was released on bail, and was able to continue his anti-war activism while awaiting trial. The treatment of Bradley Manning provides an indication of what Snowden would have faced had he remained in the country. He would have been isolated and tortured. Not waterboarding-level torture, as the US still reserves that for Muslims. But, torture nevertheless, in the form of social isolation, sleep deprivation, etc.

I hope that he finds a haven, as safe as possible from kidnapping or assassination by U.S. Special Operations forces, preferably where he can speak freely.

What he has given us is our best chance — if we respond to his information and his challenge — to rescue ourselves from out-of-control surveillance that shifts all practical power to the executive branch and its intelligence agencies: a United Stasi of America.

So, this is reposted from Vermont Vigilance — a new blogging endeavor [full announcement t/k].

An article from the New York Post describing an incident where a Belgian couple were kicked out of the Metropolis Country Club in White Plains, New York after Roseline Remans began to breastfeed her infant son. In an all-too-common twist these days, their ejection was accompanied by charges of “terrorism”.

Here’s the story. Remans and her husband, Belgian diplomat Tom Neijens (First Secretary of the Belgium Mission to the UN) went to the Metropolis Country Club and asked if they could eat lunch there. They were told yes, they were welcome to eat on the terrace. When Remans started to breastfeed her daughter, a manager came over and told her that she was disturbing the other people at the club, and that she would have to finish in the restroom.

Now, first of all, for the country club to make this request was against New York state law. Section 79-e reads:

In other words, even if you are a private club, once you tell someone that they can eat lunch in your restaurant, you can not then ban them from breastfeeding there. The NYCLU states:

IN PUBLIC YOU HAVE THE RIGHT:

Whether or not Neijens and Remans knew about the law I don’t know, but they argued that they should be able so stay. So, the club called the police, which led to this response, per the Post:

Detective Scott Harding allegedly yelled, “Close the doors!” and two other diners were told to leave the terrace.

Neijens said the officer warned the couple they were trespassing and said some people at the club thought they were terrorists because of their black backpack.

When Remans, on the verge of tears, questioned why terrorists would breast-feed at a ritzy club, the cop allegedly replied, “In Sri Lanka, babies are used by terrorists.”

It is not obvious who played the terrorist card here, but there are two main possibilities:

In any event, it seems clear that someone used a disingenuous claim of concerns about terrorism to enforce certain norms of behavior, in violation of the law.