Following the firebombing of a Republican campaign office in Hillsborough, NC over the weekend. Shortly thereafter, a group of self-identified Democrats (but not part of the Clinton campaign) set up a gofundme campaign to raise funds to help them reopen, and within a few hours, they had raised $13,000.

The impulse to donate to something like this seems honorable on the surface. It’s a way of rising above partisan politics to condemn political violence. It’s also bullshit.

There is exactly one legitimate reason to donate to a campaign like this: to disrupt the media narrative of “Democrats firebomb GOP offices”. Sort of a show-don’t-tell version of #NotAllDemocrats. Mission accomplished. This fundraising campaigns will now be part of the news story, which will blunt attempts by Republican operatives to make this a campaign issue, or, worse, to encourage and justify things like voter intimidation at the polls.

So, I’m glad the gofundme campaign happened. But you can stop now, and maybe pause to consider the ways in which donating to the NC GOP is a bad idea, and how the decision to do so maybe does not reflect so well on you as you might think.

1. We don’t know what happened, yet

Despite Trump’s claim that the firebombing was perpetrated by “Animals representing Hillary Clinton and Dems”, we don’t actually know who did this or why. Yes, one option is that it was people associated with the Clinton campaign and/or the Democratic Party. A more likely possibility is that is was some pissed-off, disenfranchised kids who are fed up with Trump’s hate-fueled campaign.

It’s also possible that this was a false flag attack as part of an attempt to undermine the emerging narrative of Trump supporters being particularly violent. I’m not saying that this is particularly likely, but it is certainly not unprecedented. The most famous case, of course, is the Reichstag fire, which at least some historians believe was ordered by the Nazis to create a pretense for curtailing civil liberties. Certainly if any group were predisposed to do something like this, it would be hangers on of the Trump campaign. 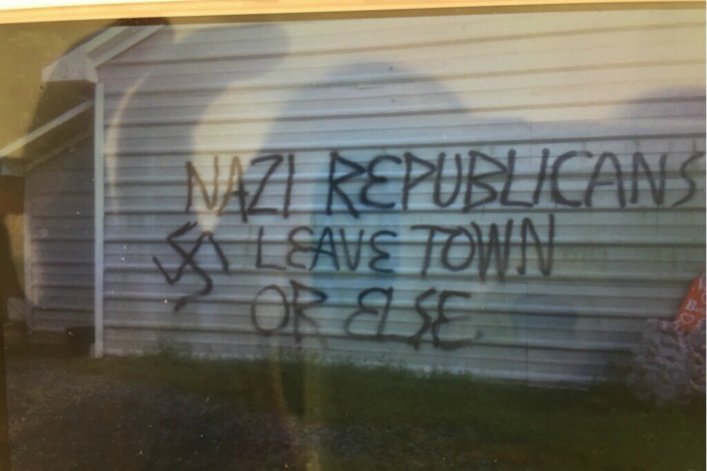 There’s also the issue of the graffiti left at the scene: a swastika and the message “Nazi Republicans Leave Town Or Else”. What seems strange to me is the inclusion of the swastika. Most liberals perceive writing a swastika as an act of violence in itself, similar to using the N-word. I think your typical anti-Nazi activist would tend to shy away from drawing a swastika, even in the context of calling someone a Nazi. I’m not generally inclined towards conspiracy, but this, more than anything, makes me think that it’s a possibility in this case.

2. They don’t need the money

I assume that the NC GOP had insurance, and that the losses suffered in the fire will be fully covered. And I know that they have the financial resources to open another office, even if it takes some time for that insurance check to come through. So, while donating to “reopen the office” seems like fair play, in practice, your money is actually going to go to fund general operating expenses, that is, to elect Trump and down-ballot Republicans.

And if, for some reason, the NC GOP is not insured (or “self insured”, as the parlance goes), keep in mind that this is the party of personal responsibility. The libertarian argument against insurance mandates is that you should have the right to assume your own risk. The second half of the argument, for non-hypocrites, anyway, is that you should not expect anyone else to bail you out once you’ve made that choice.

Donating to the NC GOP as a way of “not condoning” the firebombing makes a lot of sense, if you view the act in complete isolation. But the implication, of course, is that you are condoning every disaster – man-made or natural – that you did not donate to. And, in North Carolina, the NC GOP bears direct responsibility for at least some of the disasters befalling poor people, minorities, and LGBTQ folks.

If you’re a Democrat who was moved to open your wallet because some Trump/Pence signs got burned and the NC GOP is going to need to rent office space in a different strip mall, but you were not moved to open your wallet by the flooding of poor communities by Hurricane Matthew, or the systemic disenfranchisement of minorities, or the regressive anti-trans policies, maybe you need to take a good long look at what your actual motives were.