It is straightforward to understand how such differences could be established, since oogenesis and spermatogenesis occur in physically distinct locations, where different patterns of gene expression can produce the epigenetic differences. But, after fertilization, these parent-of-origin-specific epigenetic marks are maintained across many rounds of cell division. So, a cell in, say, your liver, will exhibit different epigenetic states on maternally and paternally alleles, despite the fact that they have occupied the same cellular environment throughout development.

The allele-specific maintenance of the methylation state depends on the fact that methylation occurs at “palindromic” sequences. When we’re talking about language, a palindrome is a word or phrase that contains the same sequence of letters when read forwards or backwards, like “a man, a plan, a canal, Panama,” or “eat tea.” In genetics, a palindrome is where the nucleotide sequence on one strand of the DNA is the same as the sequence on the complementary strand (which is read in the opposite direction). 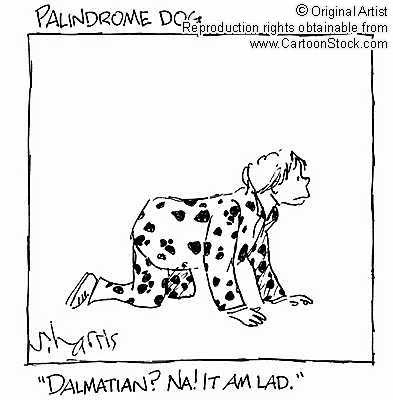 The palindrome we will be concerned with here is a really short one: CpG (where the “p” indicates the phosphate linker between the cytosine (C) and guanine (G) nucelotides).  CpG is a palindrome because C pairs with G (and G pairs with C), so that the complementary DNA strand has a CpG at the same site. Methylation occurs on the cytosines, so that if we have two alleles with different methylation states at a CpG site, they will look like this:

So, how is this methylation difference maintained when the cell undergoes DNA replication and mitosis? The key lies in the fact that DNA replication is semi-conservative. That is, in order to make a copy of a double-stranded piece of DNA, what you do is pull the two strands apart and synthesize a new strand complementary to each of them.

There an enzyme, Dnmt1, that specifically targets the unmethylated cytosine at a hemimethylated CpG and methylates it. So, after the action of this enzyme, the methylated state has been restored in each of the daughter cells. The combination of the hemimethylase (or maintenance methyltransferase) activity of Dnmt1 and the semiconservative replication of DNA set up a system in which the epigenetic state of an allele can be set once, and it will be propagated across multiple cell divisions.

In the next installment, we’ll talk about another epigenetic mechanism, histone modification, and the possibility of an analogous propagation mechanism for propagating those epigenetic marks.