So, here’s another cross-post from Vermont Vigilance:

To celebrate, why not join your fellow Americans in protesting the government’s callous disregard for the Fourth Amendment — the one that protects you against “unreasonable searches and seizures”.

There will be a coordinated set of protests nationwide rallying under the banner “Restore the Fourth”. As of now, there are sixty of them, so there is probably one near you. To find your local rally, go to this site: http://www.restorethefourth.net/

Via reddit, here is a list of other things you can do to get involved and make a difference:

So, today marks the one-year anniversary of the birth of the Occupy Wall Street movement. In celebration, there have been gatherings and whatnot for the past couple of days, building up to today’s events, which include a couple of convergences on Wall Street itself. 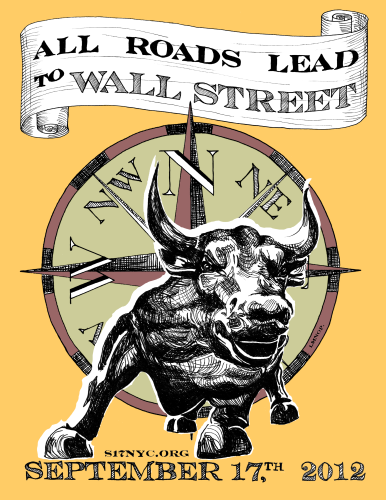 If you’re in New York and want to join, or want to read more about what’s going on, you can find information here and here.

Or, sit back and watch Tim Pool’s always awesome livestream:

I’ll see if I can get Dev and El down there, and I’ll post their report later today.

So, today is May Day!! Hopefully, you are out General Striking right now, or will be later today. If you’re stuck inside, are far away from one of the occupied cities, or just want to feel like you’re saving civilization in a way that doesn’t involve getting wet, I have assembled here a retrospective of Occupy comics from Darwin Eats Cake. Links to individual comics will open in a new window

Here are all of the “Occupy Darwin Eats Cake” strips, where the cast abandoned me last fall to join in the protests at Zuccotti Park, along with the Occupy-related strips that have come up along the way:

So, last night wasn’t just our national annual paean to Irish drunkenness. It was also the six-month anniversary of the Occupy Wall Street movement. In celebration, hundreds of occupiers moved back into Liberty Square. There are widespread reports of police overreaction and use of excessive force in the course of clearing the park, but, as usual, exactly what happened, who did what to whom, and who is responsible is a matter of some disagreement.

According to most sources, “scores” were arrested last night, according to the Seattle Post Intelligencer, 73.

For those in New York, there will be a follow-up protest at 8pm tonight (March 18) at the red cube across from Liberty Plaza. The protest is focused on yesterday’s arrests. If you can’t make it, check in on Tim Pool’s always excellent livestream. He is almost always right were the action is.

Now that the weather is warming up, expect to see a lot more occupy protests. After all, the world still needs saving.

So, here’s the latest ad from the Stephen Colbert’s Super PAC, Americans for a Better Tomorrow, Tomorrow. It asks, if you believe that corporations are people, and you make a living by acquiring and dismembering corporations, what does that make you?

So, the other day I was talking with my kid, and he was bemoaning the fact that with Playmobil and Lego, the criminals are often much cooler looking than the police. I’ve been encouraging him to use the criminals as occupiers, so that the criminals can be the good guys. Remember, the Rebels in Star Wars rarely did anything that was not against the law!

On that topic, here is a pitch-perfect video from Slate, and I soooo wish you could actually buy these.

So, Darwin Eats Cake has returned from two consecutive strips featuring dumb math equation jokes to check in with Eleonora on how the occupation is going.

So, originally, I had been hoping to write a follow-up post on everything that has happened in the wake of the UC Davis pepper spray incident. However, two things. First, everyone else and their mother has covered the UC Davis thing in far more depth than I would be able to do. Second, xkcd released this epic infographic on money, which makes putting anything else on the internet feel sort of pointless.

Instead, let me just point to a few Occupy UC Davis links:

Over at phylogenomics, Jonathan Eisen has tons of pictures from UC Davis, and has reposted a lot of the open letters that have been written to Chancellor Linda Katehi. He also has an impressive compilation of links on the topic here.

The most moving of the open letters that I have seen is the one written by UC Davis Professor Cynthia Carter Ching addressed to the students. Read the whole thing here. Excerpt:

So, to all of you, my students, I’m so sorry.  I’m sorry we didn’t protect you.  And I’m sorry we left the wrong people in charge.

And to my colleagues, I ask you, no, I implore you, to join with me in rolling up our sleeves, gritting our teeth, and getting back to the business of running this place the way it ought to be run.  Because while our students have been bravely chanting for a while now that it’s their university (and they’re right), it’s also ours.  It’s our university.   And as such, let’s make sure that the inhuman brutality that occurred on this campus last Friday can never happen again.  Not to our students.  And not at our university.

The other must-read piece on the subject is by Alexis Madrigal in the Atlantic. It rightly points out that by focusing too much on the individual cop who did the spraying, we miss everything that is wrong with the system, and the fact that the cops are, in a sense, victims of the same broken system.

Over at Boing Boing, Xeni Jardin had been covering pretty much all of the crucial OWS happenings. If you have any interest in the Occupy movement at all, you should be following her at Boing Boing and on Twitter. For just one example, here is an interview with one of the students who was pepper sprayed.

Also check out Boing Boing’s Occupy Lulz photo collection, which features the meme-ified pepper-spraying Lt. John Pike heavily, but not exclusively. Here’s the most recent addition at the time of this posting: 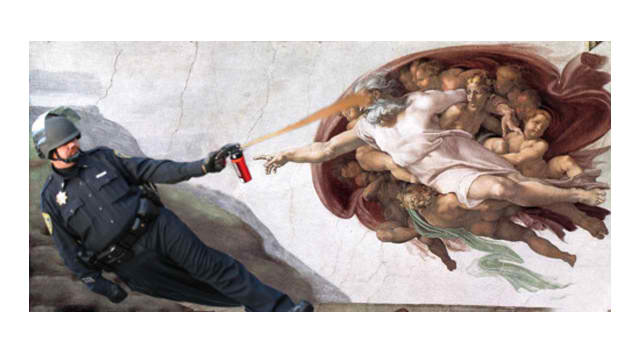 For a more exhaustive collection, check out the Pepperspaying Cop Tumblr.