So, one of the interesting things about having a website is that you can track the keywords that people Google that lead them to you. I get a lot of hits from people searching on “Jon Wilkins naked.” It turns out that’s not as exciting as it sounds. One of the other Jons Wilkins is one of the cofounders of the marketing firm Naked Communications. So, I assume that some fraction of those people were actually looking for him.

It got me interested, though, in the relative web presences of “Jon Wilkins” and “Jon Wilkins naked,” and, by extension, in the relative naked and non-naked web presences of people in general. I’m going to call this the Negative Log Google Naked Ratio (NLGNR): the ratio of the number of hits when you Google “[Person’s Name] naked” to the number of hits when you just Google “[Person’s Name]” in log base 10. Negative.

Just like in golf, low scores are better, assuming that your goal is to have your internet presence primarily associated with nakedness.

I did this for 93 people, and I have to tell you the internet is a weird place. Before presenting the whole chart, here are some of the highlights.

Where is Jon Wilkins in all this? My NLGNR is 2.32, just behind Angelina Jolie, Lindsay Lohan and Britney Spears, and just ahead of Kathy Griffin, LeBron James and Queen Elizabeth.

Most of the poets appear way down at the bottom of the chart, which makes you wonder, what’s the point of being a poet at all.

Evolutionary biologists did even worse, with many having absolutely no naked internet presence.

I’m afraid I could not bring myself to do the analysis for Justin Bieber.

Find any other interesting NLGNR scores? Add them in the comments.

So, today was the big day when the U. S. Constitution was read into the congressional record. This was preceded by a discussion of which parts, exactly, would be read. It was agreed that they would not read those sections of the Constitution that had been made irrelevant by amendments. That means, for instance, that they did not have to read all of the stuff about slaves.

And so, the Democrats lose again.

Why? Because the game being played here by the Republicans is part of the new Constitution-as-sacred-text push that is being fueled by the tea partiers. The founding fathers (sorry, I mean Founding Fathers) are being cast as infallible geniuses who set down immutably true principles of governance. Then, they can oppose any policy or piece of legislation on the moral principle that it is not what the Founding Fathers would have wanted.

The founding fathers were clever. They got a lot of things right. They also recognized that they were not going to get everything right, and that times and values would change.

So, I’m reading teh Boing Boing the other day, and they have this article about Spokeo, which I assume is having a burst of coverage right now because its founder, Harrison Tang, was just elected Grand Sucktard of Douchebekistan.

This is a “service” where you can type in your name (or presumably the name of someone you want to rob, terrorize, and/or murder), and it will show you a satellite image of their house, along with a bunch of personal information about things like number of children and estimated wealth.

Just how much of a wankwad is this Tang dude? As Boing Boing point out, “Tellingly, Mr. Tang opted out of his own site over privacy concerns.”

A full set of instructions on how to opt yourself out can be found here. I clicked on the privacy button, and was greeted by the statement that “Spokeo cares about data privacy.” You can then have yourself removed from Spokeo’s public searches (although presumably not from their database) “for free.”

BUT, they are quick to point out, YOUR PRIVACY IS STILL AT RISK!!1!11! Your information will still be available through other sites, and you will have to contact them “one-by one . . . to protect your online identity.”

Fortunately, the heroes at Spokeo have “partnered with” the company “Reputation Defender,” which will protect your online identity for a modest fee. What I’m wondering is, what’s the deal with that? Is that Spokeo’s actual business model? How is this any different from having the guy who threatens your family “partner with” Vito Corleone?

I’m not breaking any news here. I just wanted to post something because I thought that the protection-racket aspect of this whole thing did not receive enough emphasis in the article by Boing Boing’s Xeni. Not a complaint, as that article had a somewhat broader point, and is a great read for anyone interested in online privacy issues.

Also, I had about a million HILARIOUS ways to misspell “Harrison Tang”, but then decided to spare you.

So, if you haven’t already, you’ll probably soon receive the credit card bill with all of your Christmas purchases on it. Was it worth it? Well, was it, punk?

If you’re like most people, some of your presents were probably intended to impress someone. The question is, what’s the best kind of present for that? Should I give the girl from math class diamond earrings, or new batteries for her calculator? Should I give my boss a mug, or a gift certificate to Glamour Shots?

The specific context is gift-giving and mating. The model is of a sequential game with three or four stages. First, the male offers a gift to the female. Second, the female either accepts or rejects the gift. Third, she chooses whether or not to mate with the male. Then, in one version of the game, the male decides whether or not to stick around and contribute to the care of the offspring.

The conclusion of the paper is that there are many combinations of parameter values that will lead to males giving extravagant gifts. There are two critical features of the model that seem to be necessary in order to get this result.

First, there is uncertainty. The female has a guess about the quality of the male (or, equivalently, in the version of the model with paternal care, the probability that he will stick around after mating). By accepting the gift, she gains additional information about his quality or intentions. Similarly, the male is uncertain about the quality and intentions of the female – whether it is worth it for him to stick around after mating, and whether or not she is a gold-digger, who will just take his gift and skip town with his cousin.

[Editorial note: the term “gold-digger” is from the paper. Those of you who know me know me know that I would never have gone with such a politically incorrect term. I would have used “■■■■■■■■■■”.]

The other key feature is that there must be some cost to the female in accepting the gift.

Now, there are lots of parameters in a model like this, and several equilibrium solutions are possible. The interesting one is the one where males give cheap gifts to unattractive females (females whom they judge, with some uncertainty, to be of low quality), and give extravagant gifts to attractive females.

The key to getting the interesting equilibrium is that the ability or willingness to provide and extravagant gift has to correlate with the male’s quality or intentions. For example, a male can’t afford to spend two-months salary on a diamond ring every time he wants to have a one-night stand. Therefore, an extravagant engagement ring becomes a reliable indicator of his intentions. Ideally, the gift has to have no inherent value to the female, for example, if it were impossible to sell the engagement ring for cash money. Recall also that it has to cost her something to accept the gift. Then, taking the gift constitutes a commitment on her part as well. Otherwise, she benefits most from accepting the gift and walking away.

In the salacious application-to-human-mating case, this cost to the female is easiest to envision as a reputation cost (e.g., the risk of being labeled as a ■■■■■■■■■■). In certain species, where females mate with multiple males, store the sperm, and then use it selectively, there may be direct opportunity costs that do not require catty moralizing.

The paper starts with, “Gift-giving is a feature of human courtship”. The authors cite Geoffrey Miller’s 2000 book, The Mating Mind. If the paper were being written today, I assume they would have cited more recent work by Hefner and Harris.

So, here’s what I got up to last year, presented for your viewing pleasure in three word clouds.

This blog launched on July 29, and talked about the following topics: 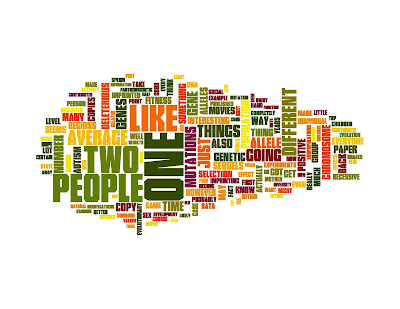 My poetry book, Transistor Rodeo, which was published this year, contains the following words, in marginally less random order: 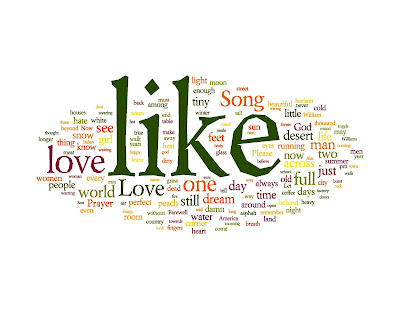 And finally, here are the papers that I published this year. Note the prominence of “et” and “al,” which really tells you all you need to know about science: 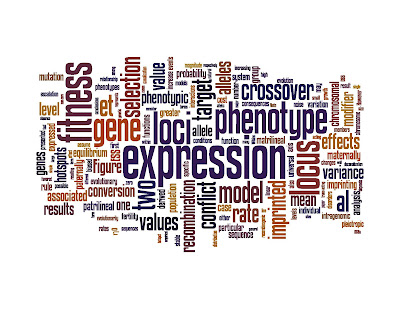