So, this one is not so much science based. Except maybe that biologists eat goat cheese? And pizza. Biologists eat pizza. So, let’s see, every place in this comic where it says “goat cheese” substitute “pizza,” and then it’s biology themed.

So, a couple of weeks ago, Cosma Shalizi, who is one of the smartest guys I know, was kind enough to link to me in a post on his blog in which he shared some found haikus that his brother had assembled from answers to science questions by 5th and 6th graders in Japan.

In response, I wanted to share this very old poem of mine. If you don’t know him, Cosma writes hands-down the best statistics blog on the internet, which also includes other interesting stuff.

If you don’t already read it, you should.

Here are two things you probably already know, but just in case you don’t, I’ll lay them out here for context.

1. The Wasteland by T. S. Eliot ends with the line Shantih shantih shantih. Eliot’s own note on the line is: “Shantih. Repeated as here, a formal ending to an Upanishad. ‘The Peace which passeth understanding’ is a feeble translation of the conduct of this word.”

2. If you repeat the name Shalizi three times, Cosma will appear in your mirror with a posse of frequentists and kick your Bayesian posterior.

So, according to YouTube, 133,000 people have already seen this.

This post is for the other 6.8 billion of you.

This awesome video features the poem The Weary Blues by Langston Hughes, as read by Allen Dwight Callahan. The visuals are of Cab Calloway. If you’re older than me, or if you’re a big-band buff, you’ll know Calloway as one of the great bandleaders of the 30s and 40s. Otherwise, you’ll recognize him as the Hi-De-Hi-De-Hi-De-Ho dude from The Blues Brothers.

This is part of the Moving Poetry Series by Four Seasons Productions.

Also, apropos of nothing, here’s a little Cab Calloway fun fact. He apparently fired trumpet player Dizzy Gillespie from his band in 1941 following an “incident” between the two. According to Gillespie’s wikipedia page,

Calloway did not approve of Dizzy’s mischievous humor, nor of his adventuresome approach to soloing; according to [band member Jonah] Jones, Calloway referred to it as “Chinese music.” During one performance, Calloway saw a spitball land on the stage, and accused Dizzy of having thrown it. Dizzy denied it, and the ensuing argument led to Calloway striking Dizzy, who then pulled out a switchblade knife and charged Calloway. The two were separated by other band members, during which scuffle Calloway was cut on the hand.

I wonder what ever happened to Gillespie’s “Chinese music” style.

So, here are a few things that I think are true.

Even if they’re not entirely true, they’re at least pretty darn close to true, and I think we’ll all do a lot better over the next few weeks if we could all agree to act as if they were true.

1. People chanting “U-S-A” following the death of Osama bin Laden do not hate other countries. They do not hate Muslims. They are expressing a sense of joy, or relief, or closure, or whatever, in a way that feels comfortable for them.

2. People who are too young to remember 9/11 do not necessarily have less of a right to their feelings about bin Laden’s death, whatever those feelings may be. Remember that those kids have lived virtually their whole lives under the shadow of the threats (real and imagined) posed by bin Laden and Al Qaeda.

3. People who are uncomfortable with the idea of celebrating the death of another human being – even bin Laden – do not hate America. Some may wish that bin Laden had been captured alive, but they don’t wish that he was still free.

5. None of these points apply to the politicians, pundits, and strategists who are going to spend the next several months exploiting and distorting events for partisan gain.

So, what would you do if faced with an old-style concrete bridge that does not really have the strength that it should?

One solution has been proposed in a PhD dissertation by Gun Up Kwon of the University of Texas. Of course, this post is only marginally about that, but there you go.

These full-size episodes tend to come out poorly on the blog, so if you want to be able to read it more easily, I recommend heading over to Darwin Eats Cake.

Gun Up Kwon (2008). Strengthening existing steel bridge girders by the use of post-installed shear connectors PhD Dissertation, University of Texas at Austin Other: http://gradworks.umi.com/33/41/3341639.html

So, in this post, we’re celebrating three things: the Royal Wedding of William and Kate, the impending launch of the Space Shuttle Endeavor (commanded by the husband of Gabrielle Giffords), and Charlie Sheen’s open letter to Chuck Lorre, as presented by the ever classy TMZ.

The sort-of heartbreaking part comes in the middle, where Sheen writes, “I’m out here with my fans every night. The message is crystal clear; NO CHARLIE SHEEN. NO SHOW”

I assume he meant something like, “NO CHARLIE SHEEN[? If not, then, as a consequence,] NO SHOW.”

I suspect that a more accurate reading of the “crystal clear” message from the “fans” might be the one that he actually wrote, which I read as “NO CHARLIE SHEEN. [And also] NO SHOW. [Please!]”

Anyway, in celebration of all of these things, here is Sheen’s letter. As read by the Queen of England. On the moon.

So, you know how around every election, and during every Republican administration, there is a constant buzz of liberals threatening to move to Canada?

But, then, you know, things turn out not to be quite so bad. Certainly not bad enough to justify having your kids grow up calling candy bars “chocolate bars.”

And then in 2008, we actually elected a president who was going to bring real change to Washington! He promised a public option as part of a comprehensive health-care-reform package. He promised to make closing down the abomination at Guantanamo a top priority.

Well, here we are in 2011. While most progressives still agree that an Obama administration beats the hell out of a McCain / Palin administration, there is a real sense of disappointment about the promises broken. You don’t hear people threatening to abandon America, however.

(With the exception of Rush Limbaugh, American conservatives don’t tend to express their political rage through threats to leave the country. They’re more likely to express themselves with racism, Nazi comparisons, and fantasies of gun violence.)

There is one man who has had enough, though: 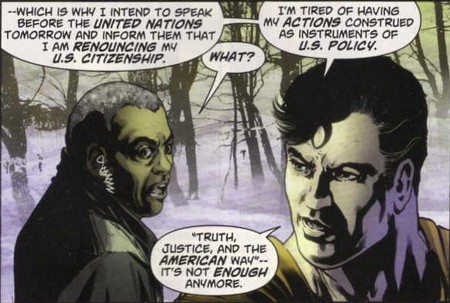 In his 900th issue, Superman returns from protecting non-violent protesters from the Iranian army. When he is confronted upon his return by government officials, he announces his frustration with being viewed as a tool of US policy.

Actually, contrary to the predictable comments on various Fox-news related outlets (no link provided), this is not about anti-Americanism. It is better described as transcending a narrow Americanism. He is still a champion of the “American Way,” meaning the ideals of freedom and democracy. He is just not an instrument of the “American Way,” meaning the economic and political agenda of the United States.

As Scott Thill notes at Wired:

The genius of Superman is that he belongs to everyone, for the dual purposes of peace and protection. He’s above ephemeral geopolitics and nationalist concerns, a universal agent unlike any other found in pop culture.

Somehow, the idea that Superman should only care about America seems vaguely blasphemous, sort of like the idea that Jesus should be taking sides in a football game.

One last thing. A number of commenters have suggested that if he is abandoning America, he needs to change his outfit, which is weird, since he wears primarily red and blue, with a bit of yellow, which would seem to ally him with maybe Chad or Romania.

So, what do you get as a wedding present for the couple that has everything? Well, William and Kate requested that people donate to charity in lieu of giving them yet another golden dhow, although I should note that my wife and I did that first. They probably heard about our wedding from mutual friends.

Okay, so you could donate to charity. But what if you have an opportunity to give a personal and symbolic gift? One that translates the inequality and entitlement symbolized by monarchy into a decidedly twenty-first-century context?

If you’re Mark Zuckerberg, you can delete the facebook pages of fifty activist groups involved in organizing protests against austerity measures in the UK. If you’re unfamiliar with the austerity measures and protests, the issue is basically that the current British government is committed to minimizing taxes for corporations and the very wealthy. Then, they notice that they don’t have enough money and demand cuts in things like education. For the past few months, there have been peaceful marches and protest throughout England, but particularly in London, which have not always been appropriately handled by the police.

So, it’s pretty much exactly like what is happening in the United States, except for the fact that no one outside of Wisconsin is sufficiently motivated to protest.

Since the incident, Facebook has issued a partial explanation, claiming that these accounts were deleted because of a violation of terms of service. Specifically, Facebook’s policy is that groups should be represented by “pages,” whereas “profiles” are only for individuals.

Now, it’s not hard to find a ton of profiles on Facebook that are also not individuals, but have not been deleted. Does this mean that Facebook was specifically targeting these protest groups?

My best guess as to what actually happened is that someone in the British government provided a list of profiles violating this policy to Facebook. So, while whoever provided the list was certainly politically motivated, Facebook probably just acted on the information given to it.

So, lesson one here is that if you have a political group that you are organizing on Facebook, make sure to set it up as a “page.” You don’t want to give your political opponents an easy way to disrupt your network.

Lesson two is that if you are a political group that is likely to piss off government or corporate authorities, you should try not to rely too heavily on centrally controlled tools like Facebook. Facebook can be great for reaching out to large numbers of people, but ideally, you should also maintain connections through networking tools that are more distributed. While I don’t think that Facebook acted with a particular political agenda in this case, they certainly are capable of doing so, and you don’t want your group to be at the mercy of any corporation.