So, a lot of times it may seem like our great nation is on a long slide towards becoming a fascist surveillance state / plutocracy, what with our increasingly nihilistic congress and its complete lack of financial or moral integrity.

But sometimes, that whole bending towards justice thing seems to be working.

As of midnight last night, Don’t Ask, Don’t Tell, the US Military’s institutionalized discrimination against homosexuality, has been lifted.

Here’s a little something to help you celebrate:

So, just a couple of days ago, I posted about the fact that my wife received advance copies of her book. We’ve just learned that it is already available for preorder on Amazon. You can check it out here.

At the moment, the Amazon page has the age range listed as 4-8, but that’s a typo. The target age group is actually more in the 8-14 range. Basically the same age group as the first few Harry Potter books.

In the mountain town of Remarkable, everyone is extraordinarily talented, extraordinarily gifted, or just plain extraordinary. Everyone, that is, except Jane Doe, the most average ten-year-old who ever lived. But everything changes when the mischievous, downright criminal Grimlet twins enroll in Jane’s school and a strange pirate captain appears in town.

Thus begins a series of adventures that put some of Remarkable’s most infamous inhabitants and their long-held secrets in danger. It’s up to Jane, in her own modest style, to come to the rescue and prove that she is capable of some rather exceptional things.

With a page-turning mystery and larger-than-life cast of characters, Lizzie K. Foley’s debut is nothing short of remarkable.

Amazon promises that if you order now with two-day shipping, you’ll receive the book the day it comes out . . . in a little under seven months.

So, by now you’ve probably heard about the latest chapter in Netflix-fuffle. They’re splitting their streaming service (Netflix proper, now) off from their DVD-mailing service, which is to be called Qwikster. Many commentators see this as a spur-of-the-moment decision, part of an effort at damage control after all the bad press they got from raising their rates by 60% and calling it a rate cut.

But, is it possible that the spin-off of Qwikster has been planned for months? There is a Qwikster twitter account that dates back to April of this year, suggesting that maybe it was.

Let’s listen in, and see if anything from Qwikster’s twitter feed gives any indication of future moves by the company. Note, these need to be translated out of Netflix’s corporate lingo.

Then there was some infighting when the streaming service really started to outperform the DVD rental service.

The DVD service could have come back to outperform streaming, had it not been for interference from upper management.

It seems as if Netflix wants to cut the DVD service altogether, but is unwilling to commit to such a radical course of action.

The DVD rental division does not require detailed lists of customers with streaming-only subscriptions.

DVD rentals have dropped to the point that the rental section of the company is overstaffed.
See, it was all right there. If only we had looked.

So, here’s a little something for your Saturday morning.

Today would have been Hank Williams (Sr.)’s 88th birthday.

So, it’s been a little while since I posted an update on my brilliant wife‘s upcoming book. A couple of weeks ago she got these in the mail: 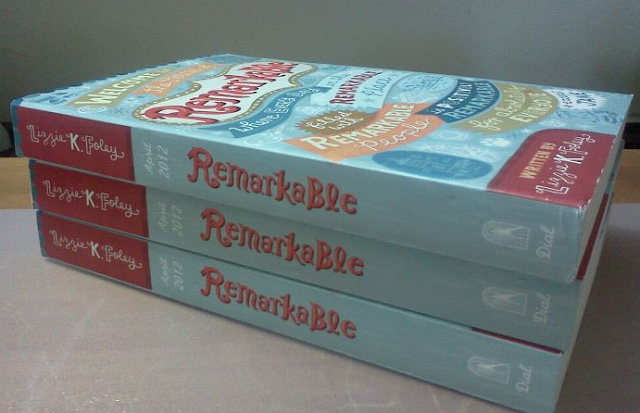 As you can see from the picture, the book will come out in Synchronous Reader Copy form in April 2012.

So, last weekend marked the 10th anniversary of the 9/11 attacks, and there were, of course, commemorative events all around the country. Few were probably as crass and horrible as the one in Washington Township, New Jersey, where the city unveiled this:

If you look closely, you’ll see that the memorial features the names of the Mayor, Deputy Mayor, two Committeemen, one Committeewoman, and the Township Administrator.

That’s right, no names of victims, or even mention of the actual event.

It’s tempting to chalk this up to short-sighted and self-important local politicians, but I feel that it actually perfectly exemplifies the national political response to the tragedy.

After a few days of public outcry, the stone was removed.  Why can’t we accomplish the same thing at the national level?

Now, to be fair, the Iraq war is probably a little bit cheaper now than it was then. So maybe we could have saved the NSF budget by bringing our troops home, say, a day earlier.

Alternatively, if our government had not lied to us, and we had never gone into Iraq in the first place, we could have . . .

. . . actually, it’s just too damn depressing thinking of all of the things that we could have done with the money we’ve spent on killing people.

So, this cracked me up this morning. Enjoy.

So, that’s what this looks like to me, anyway.

What happens if we look closer?

Or maybe that’s the actual Rick Perry and Mitt Romney, and those are ginormous chimps on their backs. Or monkeys, maybe? Oh, now I get it.

So, John Keats famously coined the term Negative Capability, by which he meant the ability to observe and contemplate the world without succumbing to the impulse to cram that experience into a rational framework. To Keats, this ability to live with mystery, with doubt, with uncertainty, was key to the appreciation and creation of beauty.

In modern usage (in my experience), people often use the term negative capability to refer to the universal human capacity to hold two contradictory perceptions or beliefs at the same time.

That’s sort of how I feel about these items, which invoke their contradictory feelings in very different ways. I want to say that each is simultaneously compelling and disturbing, but somehow that undersells the complexity of the response. In one case, the complex response is clearly deliberate. In the other case, maybe not so much.  See what you think.

The first is this art project called Casualties of War (link), which really conveys all of its own complex resonances without explanation. 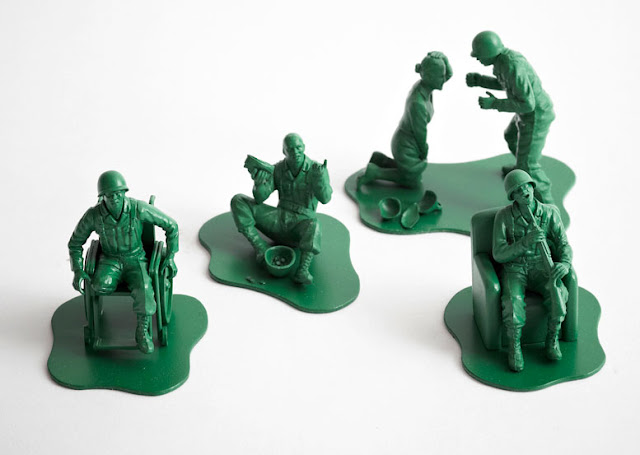 Second is this figurine, issued on the 10th anniversary of 9/11 and immortalizing the death of Osama bin Laden. In this case, I think the figurine would elicit your negative capability on its own, but the video really heightens the effect.

The green army figures are not for sale, but the Obama figure is.