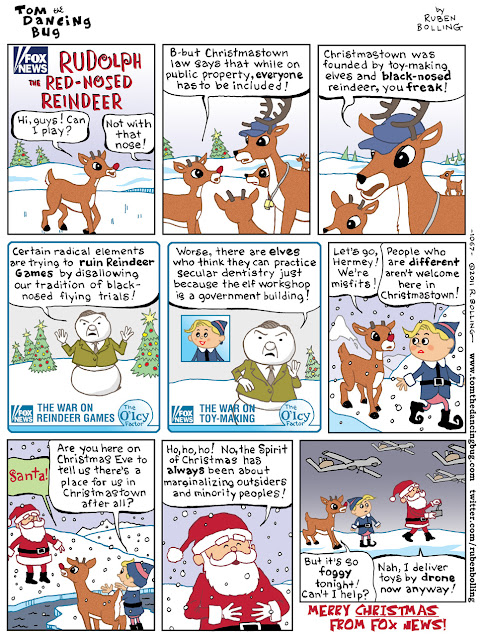 So, Darwin Eats Cake has returned from two consecutive strips featuring dumb math equation jokes to check in with Eleonora on how the occupation is going.

So, this video is called Dr. Breakfast. It will be at Sundance in 2012. The official description says:

One day at breakfast, a man’s soul busts out of his eyeball. While the soul roams the earth eating everything in sight, two wild deer bathe and dress the man’s catatonic body. . .

Which, you know, yeah, it’s that. There’s a certain something-else-ness to it, though. Watch:

via The Awesomer, who call it “bizarre, yet heartwarming,” and I’m all, yet?

The filmmaker, Stephen Neary, has a blog where he has a bunch of interesting stuff about how the film was made, his other art, and words and stuff. Much of it has a similar something-else-ness, which is similarly enjoyable.

So, remember the baby boomers? Maybe you’ve heard of them by their other name, the Most Self-Important Generation. They’re the ones who think that just because they brought you Hendrix, now they get to bring you an Orwellian police state, and you should just shut up and thank them.

Well, here are two things that made me smile this week, both of which are a form of response to the way in which a demographically very narrow experience has been defined as the essence of “American,” (and, in related news, “American” as the essence of “right”).

The first is from xkcd, and the second is from community, which is one of the smartest shows on television, which is probably why the baby-boomer executives have placed it on indefinite hiatus.

Finally, because I think it fits in nicely, I have included an excerpt from a letter written by Thomas Day in the wake of the Penn State scandal (read the whole thing here).

So, sit back and get your boomenfreude on! 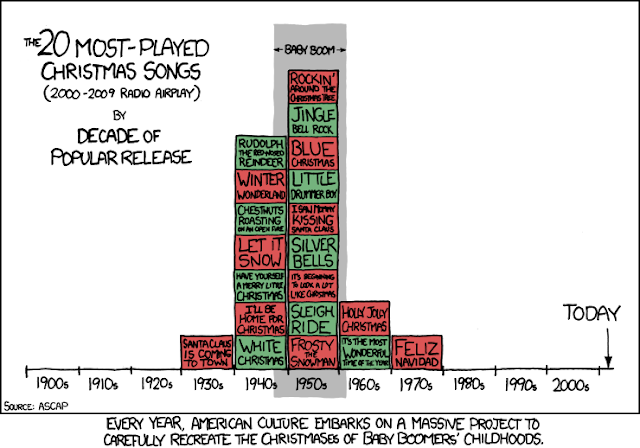 Think of the world our parents’ generation inherited. They inherited a country of boundless economic prosperity and the highest admiration overseas, produced by the hands of their mothers and fathers. They were safe. For most, they were endowed opportunities to succeed, to prosper, and build on their parents’ work.

For those of us in our 20s and early 30s, this is not the world we are inheriting.

We looked to Washington to lead us after September 11th. I remember telling my college roommates, in a spate of emotion, that I was thinking of enlisting in the military in the days after the attacks. I expected legions of us — at the orders of our leader — to do the same. But nobody asked us. Instead we were told to go shopping.

The times following September 11th called for leadership, not reckless, gluttonous tax cuts. But our leaders then, as now, seemed more concerned with flattery. Then -House Majority Leader and now-convicted felon Tom Delay told us, “nothing is more important in the face of a war than cutting taxes.” Not exactly Churchillian stuff.

Those of us who did enlist were ordered into Iraq on the promise of being “greeted as liberators,” in the words of our then-vice president. Several thousand of us are dead from that false promise.

We looked for leadership from our churches, and were told to fight not poverty or injustice, but gay marriage. In the Catholic Church, we were told to blame the media, not the abusive priests, not the bishops, not the Vatican, for making us feel that our church has failed us in its sex abuse scandal and cover-up.

Our parents’ generation has balked at the tough decisions required to preserve our country’s sacred entitlements, leaving us to clean up the mess. They let the infrastructure built with their fathers’ hands crumble like a stale cookie. They downgraded our nation’s credit rating. They seem content to hand us a debt exceeding the size of our entire economy, rather than brave a fight against the fortunate and entrenched interests on K Street and Wall Street.

So, welcome back to my intermittent live-blog of my adventures in forming a non-profit research institute in order to function as an independent scholar. I’ve written a couple of times before: about my own goals for the enterprise, and about the things that an independent scholar will most be in need of.

One of the things, of course, that an independent scholar needs is colleagues. Depending on the nature of your research, you might be able to do the day-to-day work (math and programming, in my case) entirely on your own, but unless you are a very special sort of misanthropic genius, you need interaction with a set of colleagues. Sometimes you will want to take on collaborative projects that require the expertise of more than one person, but even more, you need knowledgeable people to bounce ideas off of, people who will ask the critical questions that make your work better, or who will drop some jewel of knowledge that lets you see the problem you’ve been working on in an entirely new way.

Now, in principle, much of this can be accomplished on the internet, but I am wondering if there are not certain types of information that more or less require face-to-face contact.

Last week, I was at a “catalysis meeting” at NESCent (the National Evolutionary Synthesis Center) on genomic imprinting. The meeting was superb. It had excellent people who work on the problem from all different perspectives: theorists and experimentalists, molecular and developmental biologists, mouse people, marsupial people, bee people. I learned a ton, and, perhaps more importantly, I learned of the existence of a bunch of things that I didn’t know. I still don’t know them, but now I know that I should know, and I know where to start looking, and whom to ask for help when I get stuck.

You might think that meetings like this are particularly efficient for transmitting information, but that you can accomplish the same thing through more aggressive and far-reaching readings of the literature. After all, the organizers of the meeting were able to find these people. In principle, I could just get all of their papers and read them carefully, referring to textbooks on biochemistry or mammalian physiology whenever there was something I didn’t understand.

But I’m not sure that would actually work.

The thing is, some of the most important pieces of information I got at the meeting were things that are not written in papers, or perhaps anywhere, nor are they likely to be. For example, there were a number of people there who have spent years working with lab mice. They have observed thousands and thousands of crosses (e.g., the outcome of a mother of one mouse strain mating with a father of a different mouse strain). This has given them a deep knowledge of what does and does not happen in these crosses, as well as a sense of how sensitive different traits are to the details of the experimental procedure.

An interesting thing was that there were certain results from the scientific literature that none of these people believe, because they are not consistent with their own observations. Now, no one has gone and written a rebuttal letter, or published a set of negative results contradicting the original papers. They have all just sort of implicitly agreed that results using a certain technique, or sometimes results coming from a certain lab, are unreliable, and they move forward with their research as if those results did not exist.

So, there is this substratum of knowledge that is widespread among experts, but which does not find its way into print. In part, this is due to the thanklessness of writing response letters and publishing negative results. In part, I think, it results from a sense of decorum / political consideration. It is common for scientists to have opinions that whole swaths of research are garbage, and it is common for them to share this knowledge in conversation, particularly over beer. However, most are too cautious to put their genuine opinions down in writing — even in e-mail.

Fundamentally, I don’t think that there is anything wrong with this arrangement, as it maintains a pretty high bar for calling someone out for doing bad science, but permits people to move forward with what they collectively perceive to be the best possible information. However, it does point to the importance of getting out there and interacting with people face to face. Otherwise, you may find yourself developing a whole research project that is predicated on some results that no one thinks are true.

I should note that this problem is not unique to the independent scholar. If you are working in a typical university department, there may not be anyone else in your department — or only a small number of people — whose research is close enough to your own that you share the same scuttlebutt. That is, no matter who you are, you need to make sure that you pursue opportunities to talk informally — and in person — with the people who care about the same things that you do.

One last observation from the NESCent meeting. This was the first scientific meeting I have attended under my official affiliation with the Ronin Institute. This meant that people would look at my name tag and ask me about it. I would tell them briefly about the idea and my plans for Ronin, and they were all very enthusiastic. The people who had come over from England, in particular, tended to comment on how very brave I was. After I got back, I came a cross this translation guide:

I’m going to assume that this is just wrong. Let’s posit that a better translation for “That is a very brave proposal” would be “Wow! You are a singular genius and an inspiration to children around the world! Also very sexy! Mee-yow!”

So, it turns out that Ron Paul’s new ad is pretty awesome. I feel pretty ambiguous about many of Paul’s positions, but this is one topic on which I think he is exactly right. Also, everything about the way this video is done, from the graphics, to the modulation of the audio, to the text itself, is just rock-tastic.

That’s the official Ron Paul video, which I think was just released. However, there is another version that was made and posted back in May. I don’t find it quite as compelling overall.  The graphics are a little more inventive, but lack the frenetic energy of the new video. Also, the older one actually uses Ron Paul’s voice throughout, which lacks the cinematic, Orwellian overtones of the speaker in the new video.

Like I say, I don’t necessarily agree with Ron Paul on a lot of positions, but I am glad that he is out there making this argument. I wish more people in our government were making it.

So, I just got back from a NESCent catalysis meeting, and boy is the free energy of my transition state reduced!

There’s been a lack of bloggage over the past week, since I was actually off doing some science, or, rather, talking with people who have been doing actual science. When you’re a theorist, it’s a fine line.

[Note to self: include clever transition here before posting.]