So, yesterday I posted the news report about Kai, the surfer who hitched a ride with a guy who decided that he was Jesus, and that he was going to kill people. In an act of heroism that has already been immortalized in gif form (Smash, Smash, Suh-mash!), Kai took a hatchet to thought-he-was-Jesus guy’s head and saved the life of a Green Bay Packers fan.

I also posted of the long-form interview with Kai, which was one best line after another.

I’m not entirely sure why, but I felt compelled to produce a transcript of the interview. KAI is Kai, and JR is Jessob Reisbeck, the KMPH reporter who interviewed him.

KAI: I’m one of the heroes.

KAI: What do you want to talk about?

KAI: Wuu, went straight out of dogtown. Skateboarding, surfin’ it up. Before I say anything else, I want to say no matter what you done, you deserve respect. Even if you make mistakes, you loveable, and it doesn’t matter your looks, skills, your age, your size, or anything, you’re worthwhile. No one can ever take that away from you.

Now, this stuff right here, I was driving and I uh bfff – I was in the passenger side of this fucker’s car, and he comes over on there. He was over by the recycling center. He says, “Oh, when I was in the Virgin Islands, thirty years old on a business trip, I I uh I fucked this fourteen year old.”

He’s like, “I raped this fourteen year old.” He starts crying, gives me a big hug.

He’s like this fuckin’ three hundred pound guy. I’m like, “Holy Shit! He must be fuckered, man. Like, what’s he talking about?” I didn’t take him seriously at first.

He comes driving down this way, he’s like, “You know what? I’ve come to realize, I’m Jesus Christ, and I can do anything I fucking want to, and watch thi . . .” Bam! And he smashed into this fuckin’ guy right there, pinned him in between that fuckin’ truck, and so I fuckin’, I hop out, I look over, the guy’s pinned there.

If he had started driving that car around again, man, there would have been a hell of a lot of bodies around here.

Fuckin’ I hop on out, and so, I grab the bag. I threw it over by that pole right there, and then fuckin’ buddy gets out and there’s these two women are trying to help him. He runs up and he grabs one of them, man. Like a guy that big can snap a woman’s neck like a pencil stick.

JR: The lady said you saved her life.

KAI: She was the one who got grabbed by that fucker. And you know what? Fuck is cool. That guy ain’t. Shii . . .

JR: So he did this on purpose.

KAI: Dude! That guy was fuckin’ kooked out, man. Like, he’s beyond howlay, like, I don’t even see any breath in him. You know what I’m saying?

JR: Can, can I get your name? And where you’re from, if you don’t mind.

JR: Do you have a last name?

JR: No kidding. How old are you?

JR: Okay. Have you ever experienced anything like today? And what made you take the actions that you did?

KAI: That woman was in danger. He just finished, uh, what looked like, at the time, killing somebody. And if I hadn’t of done that, he would’ve killed more people. So, he’s dead. Good.

Mother fuckin’ the Sheriffs, not the Police enforcers fuckin’ show up and start like, uh, they’re like, “So, what, what happened? I mean like ah, just give me any old name and just give me old, uh, fuckin’ birthdate whatever, just uh. Yeah.”

What happened today after, after the . . . you’re obviously free now, but were you arrested? What was the process? What did they do to you when the came out? Obviously they found out that you did the right thing, but at the time, from the accident until now, where have you been?

Well, you started, started following I [le-ack]. I, I cleaved his mother fuckin’ head wide open with a hatchet. He stood up like he was pulled right up, right, and like, fuckin’, I’m like, I’m like, bro, if you’re fuckin’ Jesus Christ, I’ll be the antichrist, man. Like fuck that shit.

And he starts following me off this way, so I figure I’ll lure him right away from the crowd, so I’m running off this way, I, I got a hatchet in one hand, a motherfuckin’, um, this bag I’m carrying over with another hand, I start running off that way, and so, uh, a couple of the people who was bystanders to it came over and told me to stop, and I was like, “Why stop?” and he was like, “The cops are already on their way.”

JR: Were you questioned by police? Were you taken into custody? What happened? I mean, obviously . . .

KAI: I was questioned, I was put into the back of the, uh, Sheriff’s wagon, wasn’t the Polices that fuckin’ pulled I over, you know what I’m saying? Yeah, so, like, I got put in the back of the, uh, Sheriff’s wagon. The Sheriff was like, “What happened here?” Took down a statement. I told him everything I just told you. And fuckin’ let me out, said I couldn’t grab all this stuff until I, uh, I had finished, they had finished with something, you know what I mean? And like brought me back over here so I could be in front of this thing, like, this fuckin’ car right here.

It was fuckin’ gnarly, man. Holy shit. That was like the biggest wave I’ve ever ridden in my life.

KAI: Hopefully some surfing. If anybody’s watching this somewhere else, and they’ve got a Mini Mal they could lend a guy, with a wetsuit. I’d love to test out Mavericks.

JR: Would you do it again?

KAI: Club him in the head with a hatchet? You know, if I could go back in time, I’d go back over to where I was at that recycling center and he said that he had raped that chick over in the Virgin Islands. It doesn’t matter where you at. If you can fuckin’ just spend a bunch of money and do whatever the fuck you want, you know, that’s not right. If I, If I could go back in time, I would have dabbed him up right there.

JR: It didn’t seem like you have any concern for yourself. You’re all about, I mean, doing the right thing, and not even worrying about Kai first.

KAI: I don’t have any family. Like, as far as, as far as anyone I grew up with is concerned, I’m already dead. So, whatever.

If you want to kick in to help buy Kai a new surfboard and wetsuit, there’s an indiegogo for that: http://www.indiegogo.com/projects/get-kai-the-hatchet-hero-a-new-surfboard-and-wetsuit–2

This is not what the cover looks like, but this is what the cover would look like if it had been published in the pulp era of science fiction magazines. 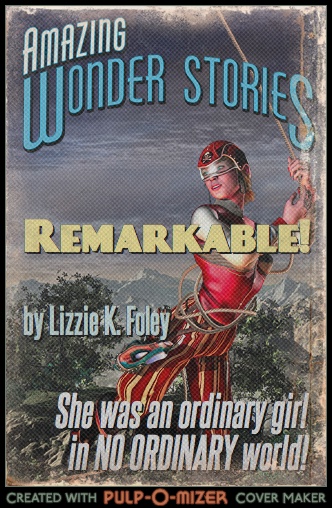 This was created using the PULP-O-MIZER, which I encourage you to waste the next several hours playing with.

For completeness, and to facilitate your resharing needs, here’s that cover rendered in square, “facebook-friendly” format (which avoids the weird cropping thing that happens when you post tall images there). 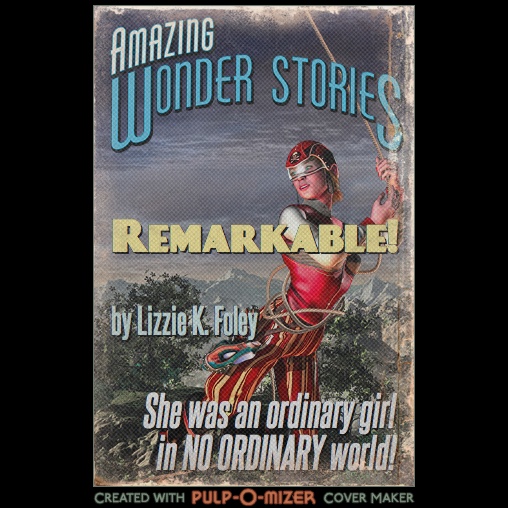 Smolinisky is trying a different approach, according to Romenesko, he

dismissed his circulation manager, business manager/controller, graphic designer and publisher so he could beef up editorial.

According to an e-mail from LA Times reporter Marsha Groves, quoted by Romenesko, thereby making this, like, triple hearsay and totally inadmissible,

As a result of the cost savings, the Palisadian-Post was able to restore writers and editors to full-time hours after several years of reduced hours and pay. The editorial staff was also given more color pages and a bigger budget for several new features that they have wanted to do for years. Alan also said every employee was given a raise for the first time in at least seven years. They don’t make much. I know of a seasoned journalist who worked there briefly for a salary in the $20Ks. Kind of shocking.

From a certain perspective, what he is doing is sort of obvious. He recognizes that the core mission of a newspaper is reporting, and he is putting his resources into that. But it seems like everywhere you turn, you hear stories about companies that are cutting the core of what they do, while maintaining or even expanding the “business” side of the business.

At universities, we hear about departments replacing tenure-track faculty with adjuncts, while administrations (and administrative salaries) expand. What if instead, you had a university that responded to financial troubles by diverting more resources to its faculty? This is, of course, purely a thought experiment, as it seems almost inconceivable that any university administrator would make this sort of a move.

The reason I’m writing about this is that it struck me as resonant with one of the things we are trying to do with the Ronin Institute. We are starting from ground zero with researchers, and trying to develop a lean, minimal support system, one that will allow us to focus as many resources as possible directly on the core business of researchers — doing research.

Anyway, I’ll be eager to see how Smolinisky’s experiment with the Palisadian-Post works out.

So, I want to cast your memory back, to recall your youth, to the time when you saw your very first Gangnam Style parody, and you thought that the internet could not possibly get any better.

Now, get ready to call me your mind fan, because I’m here to blow your mind.

Mr. T has an advice column, and promises that you’ll be able to send him questions through his app. I’m sure there’s an inappropriate joke of some sort there, but I’m a busy man, so you’re just going to have to think is up for yourself.

So, you’ve probably already seen this story about the dude who said that he was Jesus, smashed his car into a utility worker, attacked a woman, and was finally subdued by a homeless hitchhiker with a hatchet. If you haven’t, for whatever reason, here’s the news report:

Even better, though, is the full-length footage of the interview with the homeless hitchhiker, whose name is “Kai,” because of course it is.

The world needs more heroes like this guy. I hope somebody comes through with that Mini Mal.

Also, how awesome would it be if he were on the next season of Dancing with the Stars (with Dina Lohan, of course).

So, this Ze Frank thing dates back to 2006, but if you don’t care who’s actually in the Superbowl, it feels totally current.