So, I’m among those who believe that a baseball player only gets a reputation for being “scrappy” if they are not very good. You only get called scrappy if you scramble around and smother a ground ball that a fielder with better range would have gotten to easily. (I’m looking at you, David Eckstein.)

I decided to address this question by collecting some data that really has nothing to do with the original question. Using a method similar to that used by the Negative Log Google Naked Ratiometer, I looked at each position to see how often the position was referred to as “scrappy” and how often it was referred to as “crappy.” 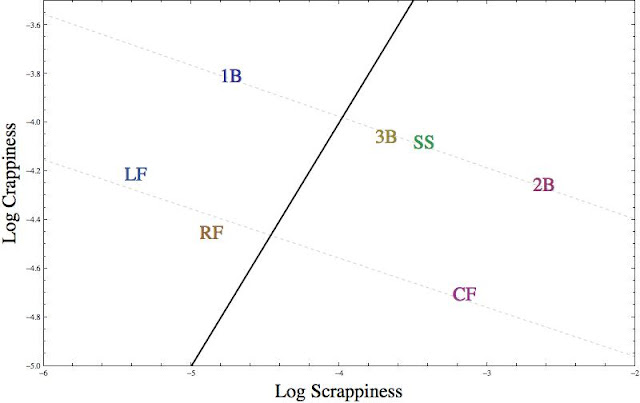 If we look at the infielders and outfielders separately, the positions fall close to two straight lines with similar slopes.[1] Within each group, the relative scrappinesses are more or less what you might expect. The interesting thing is that each group has an inverse relationship between scrappiness and crappiness.[2] The scrappier a position is, the less crappy it is.

The solid diagonal line is the iso-(s)crapocline, or the line indicating equal scrappiness and crappiness. First basemen (1B), left fielders (LF), and right fielders (RF) are crappier than they are scrappy. Third basemen (3B), shortstops (SS), second basemen (2B), and center fielders (CF) are more scrappy than crappy.

Pitchers and catchers were left off, since there is too much cross talk on Google with non-baseball uses.

But, let’s get back to the original question: “Can you spell scrappy without crappy?” One answer is, “Yes, if you spell it in Albanian.” Via Google Translate: you can definitely spell i copëzuar without i mutit.

[1] You may have noticed that these straight lines represent power laws. If I were a physicist, I would say something about universality classes, and publish this blog post in Physical Review E.[3]

[2] This seems to violate the assertion I made at the beginning of the entry, but the right way to do address that question would actually be to look at how often “scrappy” is used to describe individual players, and then to compare this to an objective measure of crappiness, based on player statistics.