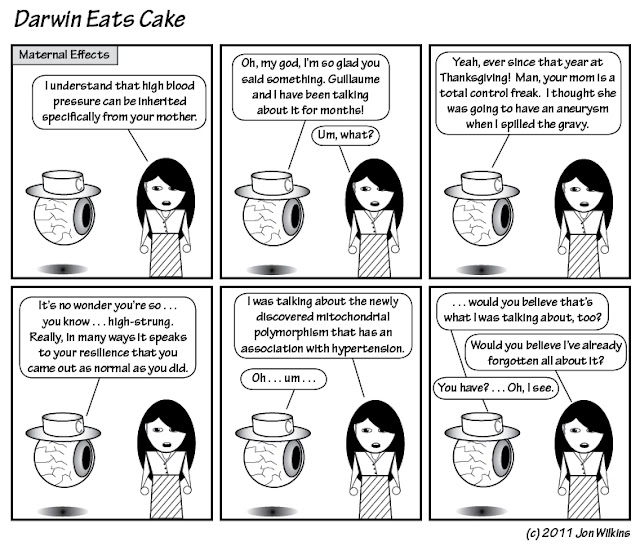 This is based on a recent paper (citation below) where they identify a point mutation in the mitochondrial DNA that appears to result in hypertension.

So why is this interesting? Well, for me, as an evolutionary theorist who works on intragenomic conflict, it is interesting because the mitochondrial DNA is, in principle, subject to selection pressures different from the rest of the genome. For instance, mitochondrial genes present in a female would, in principle, benefit from skewing the sex ratio of the offspring of that female, since those genes can only be passed on to grandchildren through daughters. Furthermore, since mitochondria are maternally inherited, the intragenomic conflicts over inclusive fitness effects that underlie the phenomenon of genomic imprinting could potentially shape the evolution of mitochondrial genes as well.

Sadly (from the theory perspective), the scope of phenomena influenced by mitochondria is fairly limited, with a lot of the effects limited to core metabolism. That’s not to say that core metabolism is not important. Obviously, core metabolism is important to the survival of the individual. In fact the importance of these genes to survival is exactly what tends to make them evolutionarily less interesting. By and large, core metabolism is unlikely to be a significant locus of intragenomic conflict because all of the genes in an individual need that individual to be able to do things like, e.g., make ATP.

From this perspective, then, this mutation is interesting in that it represents an example of a phenotype that can be quantitatively affected by the mtDNA. This particular mutation is likely best interpreted as a mildly deleterious one that happens to exist within a particular family in China. However, it opens up the possibility of mutations with subtler phenotypic effects, which could potentially be subject to divergent selective pressures for different parts of the genome. For instance, if elevated blood pressure during pregnancy results in a greater transfer of resources from mother to offspring, we would expect autosomal and mitochondrial genes to favor different optimal blood pressures.