So, apparently, there is an auction going on right now for a 1754 newspaper that was the original publication of Benjamin Franklin’s famous “Join, or Die” editorial cartoon. In reading the description for the item, I learned some things. (Reading, who knew?) While this cartoon is primarily associated with the Revolutionary War, and the need to unify against England, it was actually originally a call for the colonies to unify against the French in the run-up to the French and Indian War (the Seven Years War to non-Americans). Shortly after the publication of the cartoon, Franklin attended a meeting of colonial delegates in Albany, where he proposed the creation of a Federal government charged with coordinating defense among the colonies.

Everyone else said no.

Despite not forming a Federal government, the colonies came out of that war just fine, and the war’s outcome actually paved the way for the colonies’ westward expansion. Which has to make you wonder if, at the outset of the Revolution, Franklin didn’t seem a bit like the boy who cried wolf.

Kate Beaton, the genius behind the history-themed webcomic Hark, A Vagrant, already knew that Franklin was repurposing the cartoon: 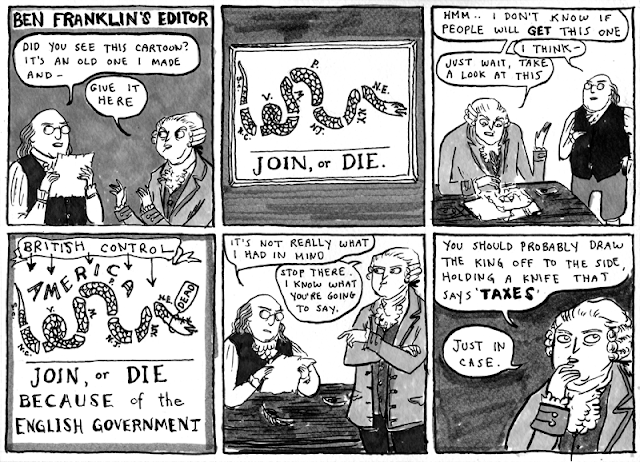 If you want to own this, you can place your bid here. The minimum bid is $50,000, and the auctioneers expect a final price between $100,000 and $200,000. As of now, the number of internet/mail/phone bids that have been places is, um, zero. I guess newspapers really are dead.