So, there’s an update on Scott Olsen, the Iraq-War Vet whose skull was fractured by police at the Occupy Oakland protest. Olsen’s status has been upgraded from “critical” to “fair,” but that he will need to undergo surgery within the next couple of days to relieve pressure on his brain. Iraq Veterans Against the War and Veterans for Peace have set up donation sites to help cover medical bills.

Now, you might think that if you are a veteran who served two tours of duty in Iraq, and you get hospitalized by the police while engaging in a peaceful protest, that there would be some mechanism for covering medical bills that didn’t rely on private donations. Of course, if we lived in that America, people would not have needed to be out protesting in the first place.

If you recall, the Washington Post’s coverage of the violent police crackdown on protesters was illustrated by a picture of a policeman petting a cat that was “left behind by Wall Street Protesters.” Well, that photo now has its own tumblr: Oakland Riot Cat. Here are a couple of samples. 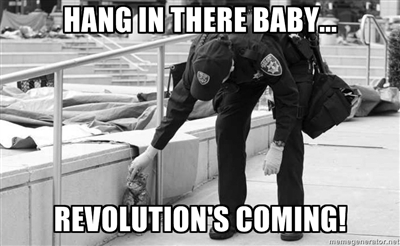 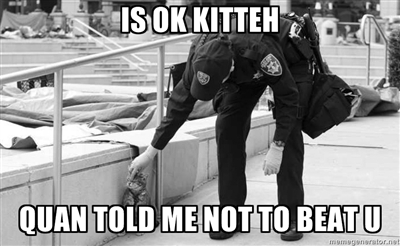 where Quan is Oakland Mayor Jean Quan, who still seems to think that she bears no responsibility for this.