So, if you haven’t seen this video from last night’s Occupy Oakland protest, here it is. Don’t watch if you’re not comfortable with blood or profanity. Or if you desperately want to cling to the illusion that the Occupy protesters are a bunch of selfish hoodla, while the police are uniformly faultless champions of freedom (in which case you should go back to eating usual shit sandwich from Fox News).

Basically, what you have here is a guy lying on the ground bleeding from his head after he got nailed by some sort of police projectile: maybe a tear-gas canister or maybe a wooden dowel. You have a phalanx of police standing there doing nothing for him. Then you have some protesters running over to help the guy. At which point one of the cops tosses a flash grenade right into the middle of the group.

The bleeding guy is Marine Scott Olsen, who was twice deployed to Iraq. He is currently in the hospital in serious but stable condition with a fractured skull.

As with virtually every example of the occupy movement across the country, those encamped were conducting themselves peacefully beforehand, protesting current economic, social and environmental conditions in the U.S. brought about by decades of corporate control, a criminal financial industry and wars in Iraq and Afghanistan that are driving the U.S. global empire into bankruptcy.  These “occupy movement” participants are telling us something we need very desperately to hear.  They should be listened to, not arrested and brutalized.

Police in the majority of cities are acting with restraint and humanity towards the encampments, but Veterans For Peace will not be deterred by police who choose to use brutal tactics.  In fact, as happens with repression everywhere, more people join the cause.  We do believe that the rank and file police officers are part of the 99%,  the overwhelming majority of Americans who are suffering at the hands of an intolerable system.  Layoffs and cutbacks in city after city prove that we must join together to demand justice for all.

We send our very best to Scott Olsen and his family and wish him a speedy recovery to health.

We shall not be moved.

Amen to all of that.

How do you think the Washington Post covered last night’s evictions in Oakland? 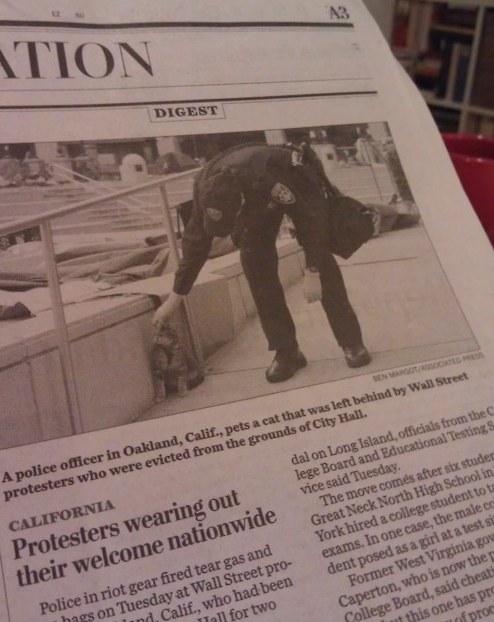 That’s right! It was all about cops heroically petting the kittens that the selfish Occupy protesters left behind. (Via Wonkette.)

Boing Boing has a nice round-up of coverage from Oakland here.