So, look, I like public radio as much as the next guy. Which is to say, you know, Car Talk is sort of funny, I guess. But at this point, I think I’m pretty much done with them.

It seems that these guys are so desperate to avoid accusations of liberal bias (even if they come from unabashedly biased right-wing sources) that they will fire (or force someone else to fire) anyone who participates in the Occupy protests.

The first was opera reporter Lisa Simeone, who participated in an Occupy-related protest near Washington. She was the host of Soundprint, an independently produced show distributed by NPR, but was fired after pressure from NPR, which was prompted by criticism from Fox News and the Daily Caller. Her other show, World of Opera, refused to fire her, so NPR dropped distribution of the show, which will now be distributed by North Carolina’ WDAV.

Simeone noted that, if she is in violation of NPR’s ethics codes for speaking outside of work, then so are a lot of NPRs political reporters. Of course, the difference is that she was acting as an individual citizen, and not being paid, plus, she does not talk about politics at all in her radio show. Other people, who are political reporters, get paid to speak for businesses and on mainstream media outlets. So, there’s that.

Just to recap: Opera reporter exercises free speech, for free, on her own time? Ethics violation. Political reporter paid by corporations to talk politics on their own time? AOK!

More recently, Caitlin Curran was fired from her job at The Takeaway, which is produced by WNYC and Public Radio International, after becoming virally famous for this photo: 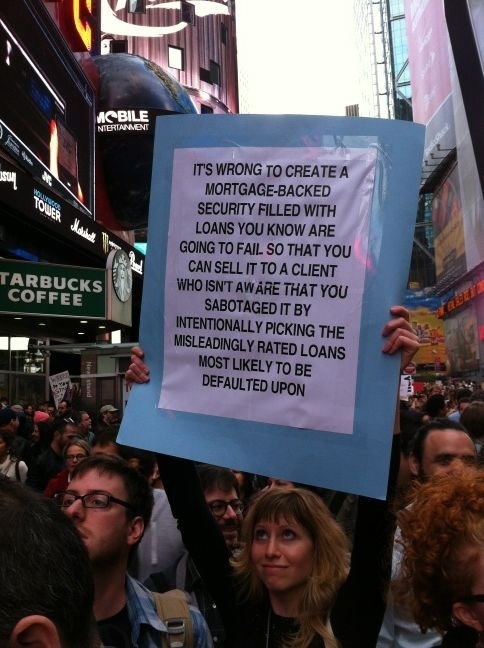 My guess is that public radio is running scared right now from the right-wing attack on their federal funding, which has been going on forever, but has been particularly vocal over the past six months or so. Here’s the thing, though, it does not matter how much you bend over to appease the right. They are going to keep coming after you. Even if all the federal funding is taken away, they are still going to keep coming after you.

The problem is that to the right, public radio is inherently symbolic of liberalism, if for no other reason than that it does not pander to anti-intellectualism.

Anyway, all of this brings us to the latest episode of Darwin Eats Cake. I posted the first two strips in the Occupy Darwin Eats Cake series here.  Here are the next three: