So, you know Galaxy Zoo? That’s the outfit that has been leveraging the power of millions of people who have grown tired of the excessive availability of pornography on the internet to help them to classify the shapes of millions of galaxies observed as part of the Sloan Digital Sky Survey.

Well, they’ve got this cool thing where you can enter text, and it will render it in a sort of galaxy font, made up of galaxies that resemble letters. It’s not, you know, the most readable font in the world, but if you use this in your presentations, you’ll probably get less crap from design geeks than if you use comic sans.

Anyway, here’s an illustration, featuring a new poem, which is part of a series. The title of the series is still in flux, so it is presented here untitled. 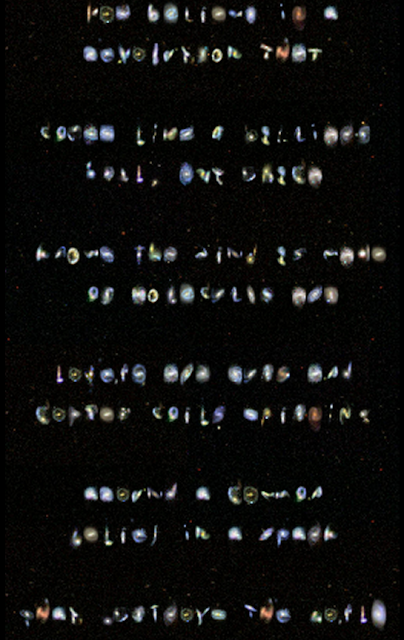 A little hard to read, but some of the letters are awesome. And, you know, each one of these is a whole galaxy, which is, like, crazy.

Anyway, here’s the original text for those of you who don’t find satisfaction in extreme textual disorientation.

You believe in a
revolution that

knows the wind is made
of molecules and

around a common
belief in a spark

that destroys the world

It’s got a limit of 250 characters, but that’s at least long enough to translate all of Kim Kierkegaardashian’s tweets.