So, it’s that time of year again, when you have to come up with gift ideas for the population geneticist in your life. Personally, I like cash, but if you insist on coming up with personalized gifts, here are some ideas for you:

This book was originally published in 1979. When I was in grad school, it had been out of print for years. People would pass around xeroxed copies that had been made from other xeroxed copies.

Finally, a couple of years ago, the second edition came out. So now the population geneticist in your life can own their very own book-shaped copy.

Of course, it’s a little bit pricey. Fortunately, there are plenty of other gifts on this list for the folks about whom you don’t care enough to buy this book. 🙁

2. The Gospel of the Flying Spaghetti Monster, by Bobby Henderson

Okay, cheapskate, maybe this is a little bit more your speed. This is the perfect gift for the pastafarian population geneticist.

Or it could be a good evangelical gift for those who have not yet been touched by his noodly appendage.

And look, it comes with one of those little ribbon things that means you don’t have to use your wadded up Starbucks receipt as a bookmark!

With a pool ball on it!

There are a number of different aggressively obnoxious things that you can get for your car, like a T-Rex eating a Jesus fish. But if your goal in life is to get your headlights smashed by some nice religious folk, nothing will beat this “Procreation Car Emblem.”

If you’re in the mood for something a little more subtle, there are some good options in the “Customers who bought this item also bought” section.

Okay, okay, I know what you’re thinking. That this is shameless promotion of my wife’s book, and has nothing to do with population genetics.

Also, the story features boy and girl identical twins. So, analyze that.

I can’t hear you.

Okay, check this out. You send in a swab of DNA, and $199, and they’ll send you a giant picture of a gel, which is I guess is supposed to be some fraction of your genome? Maybe? It looks like there are supposed to be eight sample lanes, and it’s that old-school sequencing analysis where each dideoxynucleotide terminator gets its own lane. So this might be about forty bases of sequence. Maybe?

To be honest, though, this looks a lot more like a protein gel to me. Maybe they use your DNA, clone a little tiny homunculus of you, grind it up, trypsin digest it, and this is that gel.

If that wasn’t bad enough, you also have the option of getting your DNA made into a giant QR code poster (that no one will ever scan).

For the money, I’d go with two copies of the Ewens book.

The classic here is 23 and Me.

If you want to surprise them, order the kit and swab their cheek while they’re sleeping.

If you really want to surprise them, order a second kit, swab a random guy, get the results, and claim that the results are from their father.

Yeah, you thought plugging my wife’s book was shameless? I’ll show you shameless! Check out these new items from the official Darwin Eats Cake store:

Don’t see anything you like? You can check out the comics and contact the “artist” here to submit special requests.

10. Ronald Reagan Riding a Velociraptor with a Machine Gun

Okay, so this one really has nothing to do with population genetics, but it is 100% pure awesome. 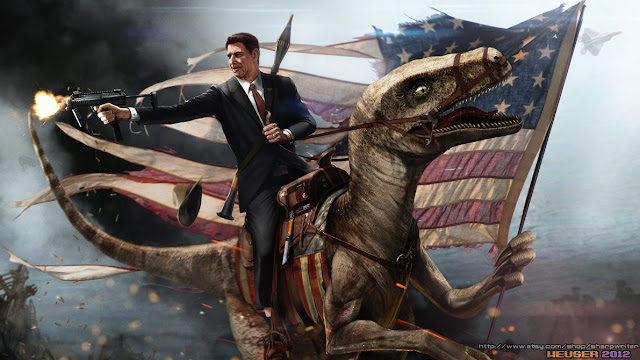 Other ideas? Leave them in the comments.