Last week I was in Raleigh, NC for Evolution 2014, this year’s edition of the annual joint meeting of the Society for the Study of Evolution, the Society of Systematic Biology, and the American Society of Naturalists. I brought a poster that presented some work I’ve been doing on how noise (e.g., environmental fluctuation) can select for epistasis (non-linear interactions among different genes). On Monday evening, when I was hanging out by my poster, someone showed me that my Acknowledgements section had made it to twitter: 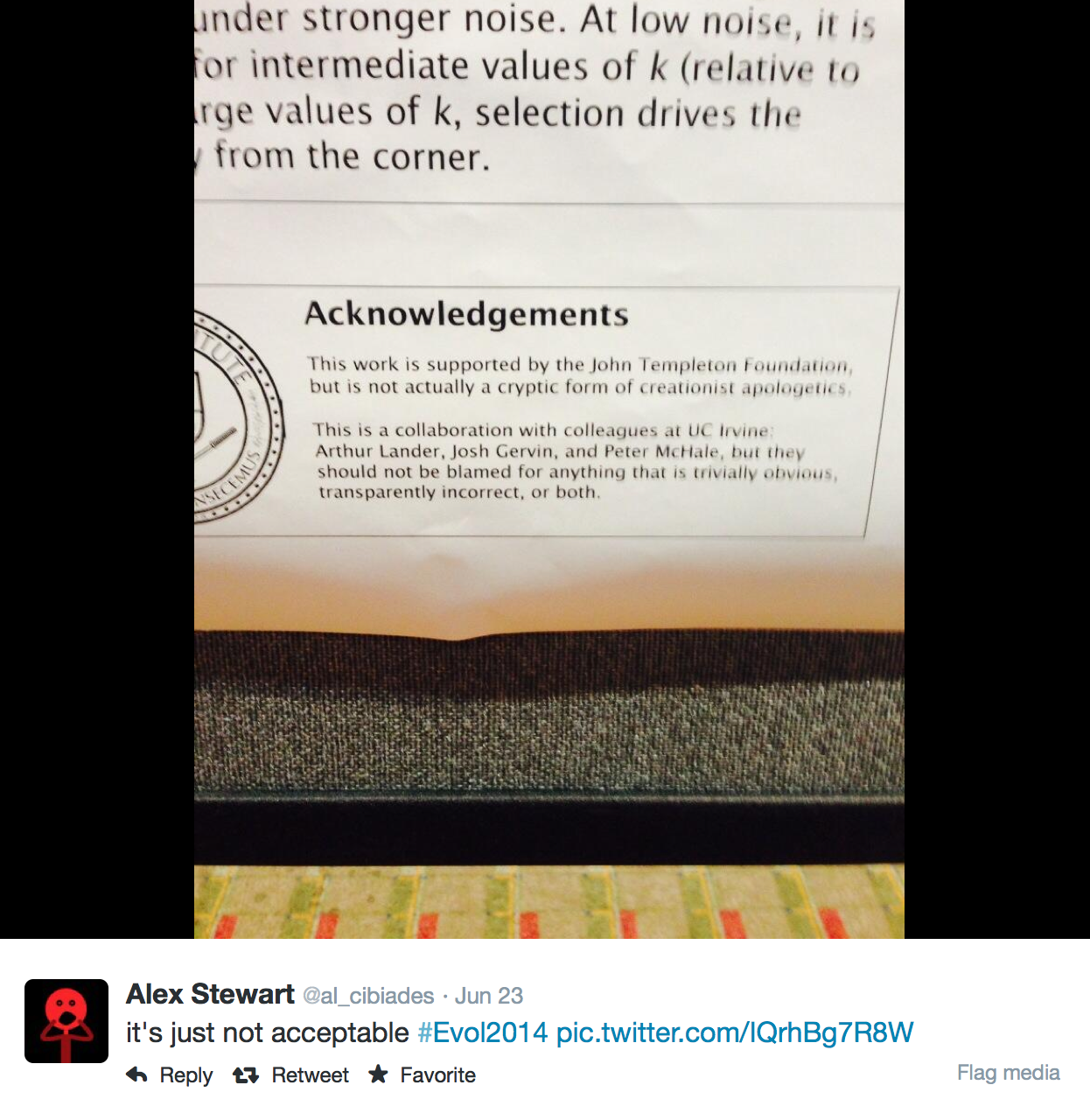 Now, this is what you might call an underdetermined tweet. Not knowing Alex, I was not sure what the intent was. Was this a sanctimonious evolutionary biologist expressing outrage about the fact that I had funding from the Templeton Foundation, which is viewed skeptically by many biologists because of its interest in religious topics? Or was it someone who thought it was unacceptable to include jokes in your acknowledgement section?

Fortunately, it turns out to be the only answer that won’t make you lose faith in humanity: it was someone being ironic. Alex Stewart is a postdoc working with Josh Plotkin at U Penn. Last year Alex and Josh published a paper in the Proceedings of the National Academy of Sciences, and in their acknowledgements section they thanked a number of funding sources, including the “Foundational Questions in Evolutionary Biology Fund”.

Through some mechanism that appears to be named “Todd”, this paper was brought to the attention of Jerry Coyne, evolutionary biologist at U Chicago and blogger at Why Evolution is True.  Along with people like PZ Myers and Richard Dawkins, Coyne is a prominent and vocal critic of Intelligent Design and of the efforts by religious groups to undermine the teaching and study of evolution.

So why did Coyne care about this paper? Because apparently, if you look into the Foundational Questions in Evolutionary Biology Fund, it is a big pot of money at Harvard Univeristy, which was put there by the John Templeton Foundation. Coyne gets mad whenever anyone has anything to do with Templeton. And, in this case, he professed outrage over the fact that they had “disguised” their funding source.

Now, I’m guessing that when Coyne saw Alex’s picture, he did not notice or recognize the name, as he seems to have read the comment as straight-up, unironic outrage, and he jumped on the bandwagon with his own short post, summed up by his comment, “Unacceptable indeed!” He goes on:

Okay, who are these miscreants?

The good news is that scientists clearly recognize the woo-ish nature of Templeton, as well as its nefarious mission to pollute science with religion. (Note, though that, contra the slide, Templeton has disavowed all forms of creationism, including intelligent design.)

The bad news is that four collaborators on this project took Templeton money anyway.

This is pretty awesome. I don’t think I’ve ever been called a miscreant before.

The rest of this is sort of weird, though. I think it is fair to say that the scientists recognize the fact that Templeton is perceived as “woo-ish” by many in the evolutionary biology community. However, most of their funding these days, including this grant, is pretty much straight-up science. Also, if you read the acknowledgements, which state that the work is not creationist, and then read Coyne’s comment, it makes you wonder if he knows what contra means.

Most of the comments go back and forth on the issues you’d expect, so I’ll limit myself to Coyne’s. His first is this:

Would you take money from the Council of Conservative Citizens (a segregationist organization), or the Tea Party to do pure science? How about the Nazi Party? Is there no organization so nefarious that you wouldn’t take their money?

I do fault those who take Templeton money, for they’re lending their imprimatur to an organization whose aim is the corruption of science. That’s precisely why Templeton funds “pure” science–to give them cover for their investigations of “spirituality and science”–the so-called “Big Questions.”

That’s some classic straw-man bullshit right there, although you have to give him credit for going full Godwin in his first comment, thereby saving his community the embarrassment of being the first to bring up a bogus Nazi analogy. That’s leadership!

And while I can be (and have been) accused of many things, compromising my principles to get tenure may be the least valid.

As for my imprimatur, I can’t lend it to Templeton, because back when I was in Santa Fe, I loaned it to Jeremy Van Cleve, and he never returned it!

The fact is that you’ve compromised principles simply by taking the money.

First off, again, the analogy with segregationist or racist organizations (which, to the best of my knowledge, are not major sources of science funding anyway), is ridiculous and seems disingenuous. Or maybe Jerry Coyne honestly believes that Templeton is a force for evil on the level of The Council of Conservative Citizens or the Nazi Party, but I think that’s a position that would be hard to find much support for, even among evolutionary biologists.

So we’re left with what, a slippery slope argument, maybe? Or a one-drop argument?  There’s two problems with that. First, whether or not you let your scientific conclusions be influenced by your funder’s (perceived) agenda is up to you. If you’re an honest scientist, you do your work and say what you believe to be true. If some agency or foundation won’t fund you in the future because they don’t like what you said, so be it.

Second, the same argument applies to all sources of funding. For example, the funding structure at NIH strongly rewards confirmation bias and the overinterpretation of marginally significant statistics. As a consequence, the biomedical literature is riddled with unreproducible results. The funding, hiring, and promotion structures in academia have done far more to corrupt science than even the bogeyman version of Templeton that inhabits Jerry Coyne’s mind.

Maybe the intent [of the acknowledgement] is a bit nebulous, but it’s factually incorrect (Templeton doesn’t fund crea[ti]onism or ID any longer), and unprofessional as well. If you’re going to take money from someone, you don’t diss them in public. I bet if Templeton found out about this (I won’t tell them!) they wouldn’t give any more $$.

I love this last one, as it concisely captures the angry incoherence of the argument. First, it accuses me (inaccurately) of claiming that Templeton funds creationism. Second, it accuses me (inaccurately) of dissing them. Third, it suggests that if Templeton found out they had been dissed (which they weren’t), they would spitefully refuse funding in the future (which they probably wouldn’t).

Note that the overarching theme here is that I am bad and foolish, but for contradictory reasons:

I’m bad for taking money from an organization with an alleged religious agenda. But look! I’m foolish, because they have actually renounced that agenda! Gotcha!

So, if I may build on Coyne’s Nazi analogy, the morality being proposed seems to be something like this: Jerry Coyne would never take money from the Nazi Party, but if he did, he would never publicly criticize the Nazis!

But, to be fair, these comments were probably never meant to support such a close reading. A more accurate characterization might be that Coyne starts from the ideological position that no one should ever take money from Templeton. As someone who has received funding from Templeton, I am therefore someone who is bad and foolish. Starting from this “bad and foolish” conclusion, Coyne works backwards, using whatever evidence and arguments will get him from my poster to that conclusion. This includes misinterpreting my statement (through disingenuousness, carelessness, or a combination of the two) as well as employing arguments that seem logically inconsistent.

Or maybe this is a Colbert-like performance piece, where he takes on the persona of “Jerry Coyne” to illustrate how dogmatically espousing an ideology corrupts the reasoning process. If that’s the case, my hat is off to you, Professor Coyne! Well played!

One thought on “Jerry Coyne sees a picture of my poster on twitter, is a dick”