In the Republican presidential primary system, different states apportion their delegates among the candidates in a variety of ways. In the upcoming contests in Florida and Ohio, all of the state’s delegates are pledged to the candidate who receives the most votes state-wide. In Nevada, delegates are allocated proportional to the vote total (you get one of the 30 delegates for each 3.33% of the vote you get).

But a lot of the states are much more complicated. In South Carolina, three delegates are assigned to the leading vote-getter in each of the seven congressional districts, and the remaining 29 go to the winner statewide. Trump won all 50 this year by leading the pack in each congressional district.

A number of the states impose a minimum threshold. For example, Massachusetts and Kentucky do proportional allocation of their 42 and 46 delegates, respectively, among all candidates receiving at least 5% of the state-wide vote.

Several states add a winner-take-all threshold. Vermont does proportional allocation of its delegates among candidates who receive at least 20% of the state-wide vote. But if any candidate gets more than 50%, they receive all 16.

In general, the effect of these rules is to push delegates towards the winning candidates — and drive inviable candidates out of the race. This happens gently at first, as many of the early contests are more proportional. Then, as the season progresses, things take on more of a winner-take-all flavor.

Here’s what the allocation bias looks like in the Republican primaries and caucuses that have taken place through March 8 (data from The Green Papers): 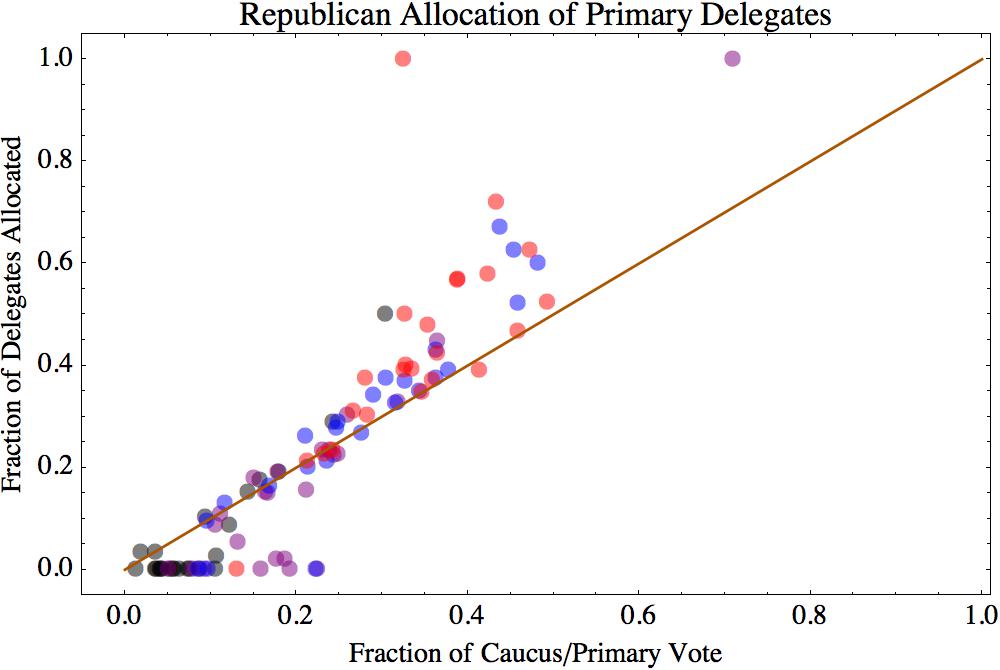 The brownish-orangish line is what you expect from strictly proportional allocation of delegates, and the points plotted indicate allocations from individual state-wide (and Puerto Rico-wide) contests. Red is Trump, Blue is Cruz, Purple is Rubio, and Black is Kasich.

One thing you can see from the plot is that Trump seems to be the greatest beneficiary of the current allocation system. This makes sense, of course, since he’s the frontrunner, and the system is basically designed to drive a consensus around the frontrunner. And, if the frontrunner were anyone other than Donald Trump, the Republican leadership would probably be very pleased with how it was working.

As a little thought experiment, here’s what the current delegate score would look like if all of the Republican primaries and caucuses used proportional allocation without a viability threshold (besides whatever minimum percentage is required to get one delegate): 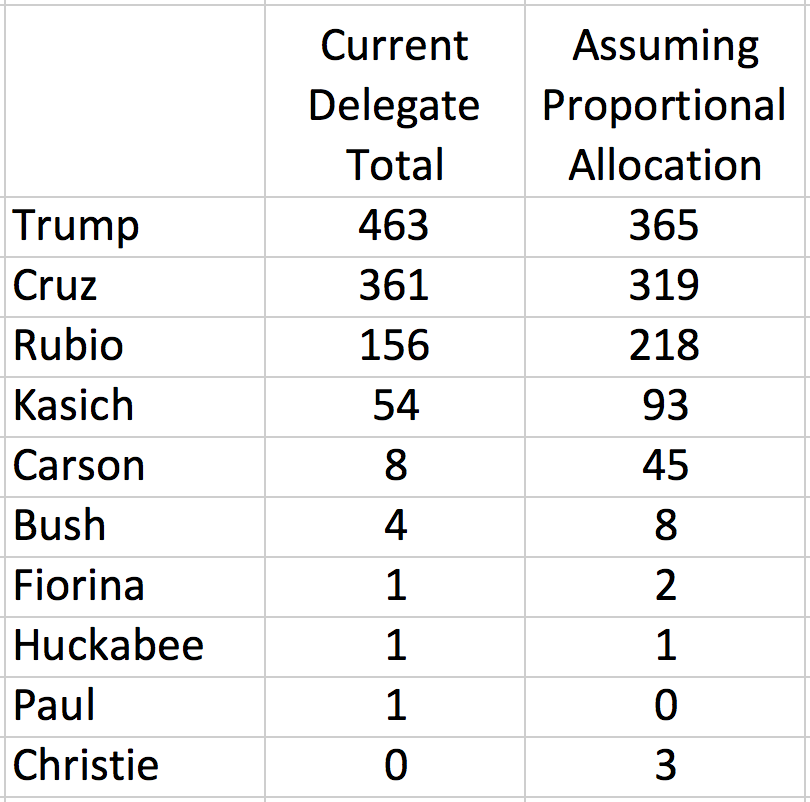 That’s not to say that things would have worked out this way under that allocation scheme, since a different scheme would have led to different reporting, different campaign strategies, and so on. But, it’s a nice simple way to quantify the effect of structural properties of the primary system on the outcome.

In that spirit, what this tells us is that about a fifth of Trump’s delegate total — and about half his lead over Cruz — can be chalked up to Republican delegate allocation math.

We could ask the same question for the Democrats, but it is not nearly as interesting. All of the Democratic contests follow the same formula: proportional allocation of delegates among candidates exceeding 15% of the vote. About a third of the delegates come from applying this formula to the state-wide vote, and about two thirds from applying it individually to each congressional district.

That system also punishes low-performing candidates, but it does not reward high-performing ones in the same way. There are no winner-take-all states or triggers (unless you win more than 85% of the vote, guaranteeing that no one else reaches 15%).

So, the Democratic system leans a bit more towards proportional overall. But much more important is the fact that there are only two competitive candidates, both of whom are rarely in danger of failing to meet that 15% threshold. 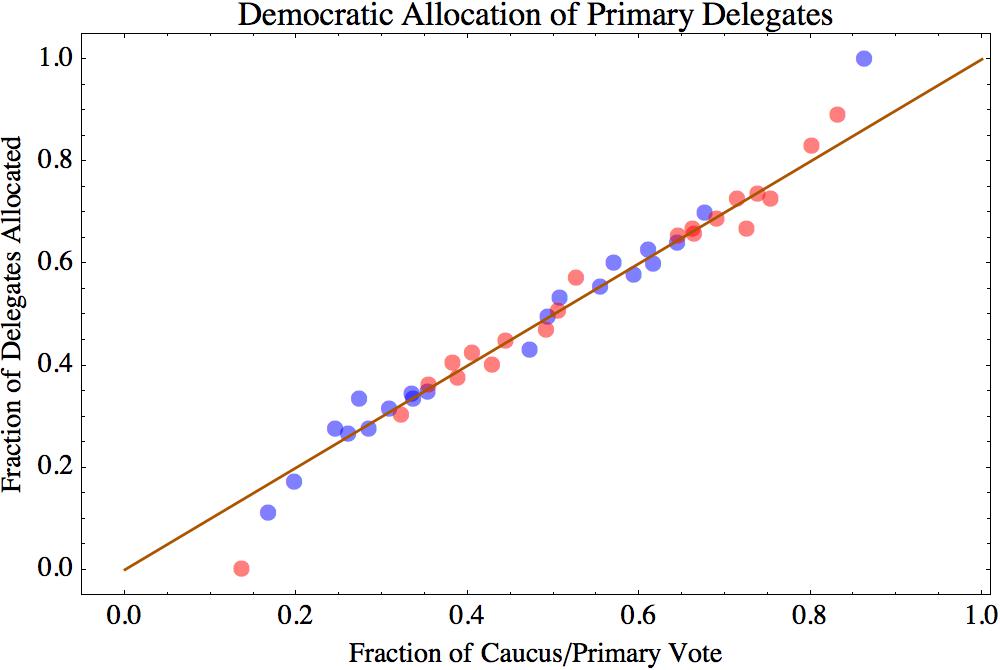 Red points represent Clinton, and Blue represent Sanders. The only real outliers are Vermont, where Sanders got 86% of the vote, and Mississippi, where Clinton topped 85% in two of the state’s four congressional districts.

I’m not advocating for any particular delegate allocation scheme here. We know there’s no perfect voting system. I just hope to contribute in my own small way to the enormous pile of regrets plaguing Republican party leaders as Trump sits atop his throne of skulls forcing them to fight to the death.