So, as you have no doubt surmised from the title of this post, the cash-strapped Republican Party is going to start using their abundant frequent “flyer” points to pay their debts.

I’m kidding, of course. The GOP doesn’t pay its debts!

Actually, we’re going to talk about a paper just out in Genetics by Aneil Agarwal and Michael Whitlock. They provide a very thorough analysis of data on the fitness effects of homozygous and heterozygous gene deletions in yeast.

But let’s back up for a minute first.

The authors are interested in understanding the distribution of dominance, in the population-genetic sense. Traditionally, the dominance is represented by h, and the strength of selection by s. Usually, we define the fitness of the wild-type (hypothetically not carrying any mutations) as 1. Then, we consider the fitness effect of a mutation in a particular gene. In this case, we’re going to focus on deleterious, or harmful mutations, which reduce fitness. If an individual carries two copies of the deleterious mutation, they have a fitness of 1-s, so that small values of s mean weak selection, and large values of s mean strong selection. The dominance refers to the relative fitness of an individual carrying only one copy of the deleterious mutation. This heterozygous fitness is 1-hs. If h equals 1, the deleterious mutation is completely dominant, meaning that having one copy of it is just as bad as having two. If h equals 0, the deleterious mutation is completely recessive, and having one defective copy of the gene is just as good as having two functional copies.

So, what is a typical value of h? Does it depend on s? How much does it vary from gene to gene? The conventional wisdom is that most deleterious mutations are recessive. This is why you should not have children with close relatives. I carry a bunch of recessive mutations, as does my wife. As long as we have different ones, our son inherits a bunch of mutations – but only one copy of each – so they’re recessive in him as well. If we were closely related, we would carry many of the same mutations, and there would be a decent chance that our son would inherit two defective copies of the same gene, which could have various health consequences. 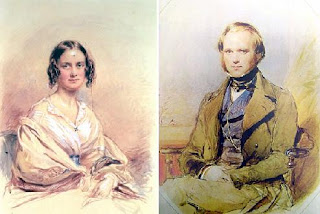 Charles Darwin and his first cousin Emma Wedgwood were married in 1839. 170 years later, they were portrayed by real-life-non-first-cousin couple Paul Bettany and Jennifer Connelly (not pictured).

However, population geneticists don’t care about things like this just because of the implications for human disease. Dominance has a major impact on the eventual fates of individual mutations, and can influence other evolutionary processes, like speciation. Often, in order to model some other process, we have to make some sort of assumption about the distribution of fitness effects of mutations. Traditionally, a researcher would pull this distribution out of his or her asc. This is one of the biggest contributions that this paper will make to the field. It provides a nice, empirically based distribution of dominance effects that can feed into other evolutionary studies.

The results also confirmed (with much greater confidence than was previously the case) the relationship between h and s which had been suggested by some previous studies. They find that larger values of s tend to go with smaller values of h. Consistent with the conventional wisdom about not marrying your cousin, strongly deleterious genes tend to be pretty recessive. More surprisingly, most mildly deleterious mutations had fairly high h values. In fact, the mean value of h over all deleterious mutations was 0.8 – quite dominant. However, when the average is weighted by the fitness effect s, it drops to 0.2.

The authors also point out that this negative relationship between h and s has implications for the evolution of dominance. This pattern is most consistent with theories in which dominance is shaped by indirect selection. For example, deleterious mutations might be recessive if the protein produced by the gene were selected for overexpression to enhance a metabolic pathway, or to buffer the performance of that pathway in certain environments. Then, loss of one copy of the gene encoding that protein might not have a major effect on function (half of too much being still enough). Alternatively, recessiveness could come from feedback mechanisms that upregulate the functional copy of the gene when not enough of the gene product is being made.

The point is that in either of these cases (among others), recessiveness is driven by selection to maintain the function of the gene. The more important the gene is (the larger the value of s associated with it), the stronger this selection will be, and the more recessive deleterious mutations will become. Therefore, mechanisms like these predict the observed negative relationship between h and s.

On a historical note, this type of buffering process was proposed by one of the giants of population genetics, J. B. S. Haldane way back in 1930. Haldane passed away on December 1, 1964.