So, for the next couple of days, Tokyoflash is running a special promotion, where they are donating the money from all purchases to tsunami relief.  Note that this does not seem to be the usual bullshit pseudo-charity thing that companies do to exploit disasters, where they donate a portion of the proceeds, meaning that they still make themselves a nice profit. According to their website, Tokyoflash is donating 100% of the purchase value, including the shipping costs, to the disaster relief fund at the Japanese Red Cross.

The only thing that makes me wary at all is the use of the phrase “purchase value,” which could conceivably mean something different than “purchase price.” Or, that could simply be an artifact of this being the English-language website of a Japanese company.

So, if you’ve ever wanted one of these, now would be a good time to buy. This promotion runs through 5pm Japan time on March 24, which is 8am in London (which is not yet on summer time), and 4am in New York (which is).

So, Texas is apparently worried about losing its status as most backward state. Enter state representative Bill Zedler, who is introducing a bill that will prevent students and professors from being “discriminated against” for questioning evolution. Because apparently he believes that this is NOT the exact opposite of the problem with science education.

I humbly submit to Mr. Zedler that he should modify his bill, expanding it to include the following:

I look forward to seeing the revised version of the bill.

Update: New post presenting my webcomic on this subject.

So, you may or may not know that The Hives also said this.

So, you probably already know about the Ann Coulter column and interview, where she says a large number of Coulter-esque things about radiation. For a thorough takedown of her argument, check out this Pharyngula post.

For a takedown that is based on ad hominem attacks rather than evidence, but contains pictures, keep reading.

So, now we know what tragedy really unfolds when you don’t cut up those plastic six-pack holders before you throw them out. They are shipped to Japan, soldered together, and sold as dubious weight-loss products.

Apparently, it “works” by dividing your fat into “easily manageable blobs,” which “raises the propensity for increased blood-flow values.”

As if Japan did not have enough to deal with right now.

Slate has an article with a couple of tips for donating to help out with Japan’s other National catastrophes. Please check it out, and, if you’re in a position to do so, give generously.

So, here’s the first new episode of Darwin Eats Cake after my move to the new platform:

This one is dedicated to Bradley Manning. 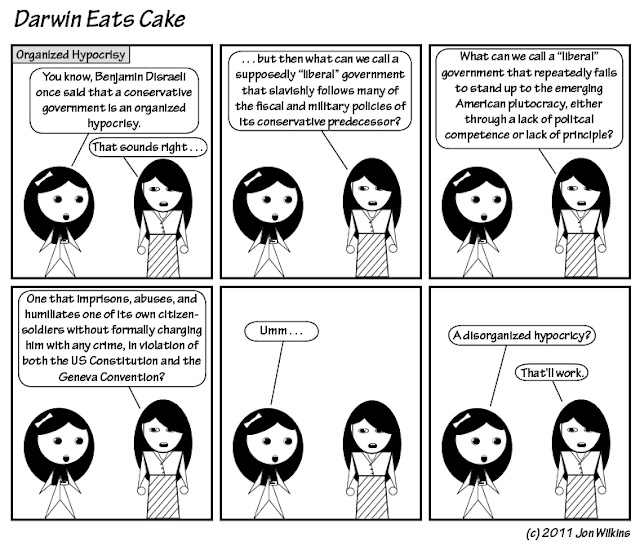 And, before you post your comment, yes, I already know that the Geneva Conventions are intended to apply to prisoners and victims of war. However, it seems reasonable to me to think that this should set some sort of lower bound on how we treat our own citizens, especially when they have not even been charged with a crime.

So, my new webcomic has been on hiatus for a couple of weeks, during which I have been making some changes.  I have reenvisioned all of the characters using original artwork, and I have given it a title and a home. The title is Darwin Eats Cake, and the URL, predictably, is http://www.darwineatscake.com.

I have recreated the seven strips that have been published here on Lost in Transcription, and they are now all available at the comic’s site. I will shortly be replacing the blog versions with the new ones.  I hope to post new strips at a rate of about two per week. If I can manage it, I will set specific days.

I’ll continue to cross-post all new strips here. The idea is that darwineatscake.com will be a nice, clean site, featuring only the comics.  Since many of the strips make reference to the scientific literature, the cross-posted versions here will contain references and potentially brief discussions.

So, what’s the best thing about all of the excitement in Madison, Wisconsin? Well, besides the vague hope that this may turn out to be the beginning of a nationwide populist progressive movement, the best thing has to be Randy Hopper. He is one of the Republican State Senators who is now facing a recall effort, thanks to his support for Scott Walker’s union-busting bill.

Apparently some protesters went to his home, and when his wife answered the door, she informed them that he no longer lived there. He now lives in Madison (outside his district, btw) with his 25-year-old mistress, who is, predictably, a former senate staffer, and, even more predictably, a lobbyist employed by the right-wing Persuasion Partners.

Rumor is that Hopper’s maid has already signed the recall petition against Hopper, and that his soon-to-be ex-wife intends to do so.

This is just the latest instance in which the Parable of the Snake applies to Wisconsin politics. In the 2010 gubernatorial election in Wisconsin, 37% of union households voted for Walker. At some level, you have to say, “you knew he was a snake when you picked him up.” Similarly, Wisconsin, you elected a guy to the state senate whose name is “Randy Hopper.” Of course he ran off with a 25-year-old staffer. It’s like Remus Lupin in the Harry Potter books. His name was “Remus Lupin,” so of course he got bitten by a werewolf.

In a way, perhaps Randy Hopper is an unwitting victim of destiny.

Or perhaps he is simply another instantiation of the tiresome political trope of the lecherous, middle-aged man who is given a modicum of power and wastes no time in abusing it.

Note: the Blogging Blue site I’ve linked to above has not been loading. Here is the link for the cached site, and other coverage can be found here and here.

So, this comes to us from the file of things you didn’t even know you needed: Thunderwear! What is Thunderwear, you ask? Obviously, it is underwear with a built-in holster for your gun. Well, I guess technically it is a holster that you wear under your pants, but over your underwear. But, that assumes that you actually own and wear underwear, and I don’t like to make assumptions about my readers. You know what happens when you assume!

Anyway, I wanted to draw attention to this product, because most of this blog’s readers are probably academics, and the current wave of gun-lobby insanity is for states to allow concealed weapons to be carried at universities. Or, more specifically, to require universities to allow concealed weapons on campus. I believe that Utah has already passed such a law, and legislation has been proposed in a number of other states, including Texas and Arizona. So, next time a student comes in to argue about their grade on a test, you’ll be ready.

The site also provides testimonials. Here, by far, is the best one:

“I have been wearing it tonight with the P230 and it works fine. Tried it out at dinnertime in jeans & a t -shirt, neither wife nor kids were the wiser. thanks.” A.P Los Angeles CA.

No, indeed, they were not.

So, a couple of months ago, I posted an announcement that my wife had gotten a two-book deal for her middle-grade book Remarkable. If you want to experience my going on and on about the book, I’ll just refer you back to that post. For the just-the-facts version: her agent is Faye Bender, her editor is Nancy Conescu, and the book should be coming out in 2012 under Penguin’s Dial Books imprint.

Anyway, the point of this post is to let you know about her new author website, which you can find at http://www.lizziekfoley.com. You’ll find pictures and factoids and a lot of little things that will give you a sense of the book.

So, go check it out. Then come back here and read some more blog posts. You will come away with a good sense of how lucky I got when she married me.