Previously, I did a calculation to compare the state of the Republican primary with what things would look like under a scheme where delegates were allocated strictly proportional to the popular vote. Here, I’ve updated that calculation to reflect estimated delegate totals through the March 15 primaries.

I’ve also added a new calculation, which is proportional allocation among all candidates who receive more than 15% of the vote. This is similar to what the Democrats do, except that the Democrats allocate some delegates based on the statewide vote, and some based on the voting in each congressional district. For simplicity, I’ve done the calculation here only at the statewide level. 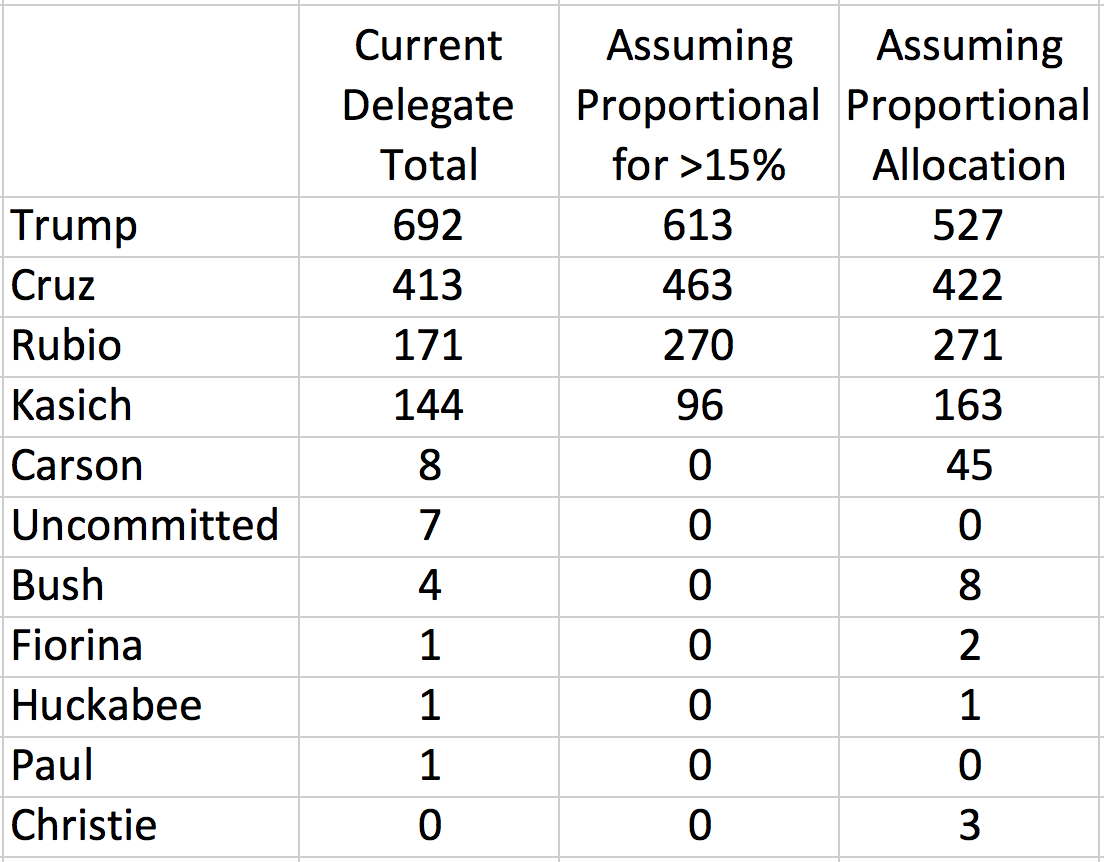 The Republican primaries use a variety of allocation schemes, from proportional allocation with no threshold (North Carolina) to winner-take-all (Florida and Ohio), with various hybrids. Overall, relative to the Democratic scheme, Republican contests tend to be more winner-take-all, and that will be increasingly true for the later primaries.

There are about 1000 delegates left, of which Trump needs about 545 to win the nomination on the first ballot. With a number of additional winner-take-all states coming up, this seems the most likely outcome. Under even the thresholded proportional scheme, he would need 624, which, under that scheme, would be a tall order, given that he has received less than 50% of the vote in every contest so far, with the exception of the Northern Mariana Islands.

Not all of the results from Tuesday have been finalized. Here I have used the current estimates from The Green Papers. In particular, I’ve assigned Missouri’s delegates 37 to Trump, 15 to Cruz, and for Illinois, I’ve given 54 to Trump, 9 to Cruz, and 6 to Kasich. The numbers in Ohio, in particular, might change quite a bit.

I have not included the delegate counts from the three jurisdictions from which raw vote totals are not available. Wyoming has a weird caucus system that is still in progress. At the moment, they’ve got nine delegates pledged to Cruz, and one each to Trump, Rubio, and Uncommitted. There are 14 more delegates whose pledges will be determined at later rounds of their caucus system. I have also not included delegates from Guam or the Virgin Islands, each of which has nine delegates. As I understand it, the Virgin Islands is sending six as pledged uncommitted, and three unpledged (with a stated preference for uncommitted). Guam’s delegates are all unpledged. One has stated a preference for Cruz, five for uncommitted, and three yet to be determined. So, of the 44 total delegates not included in my totals, 27 have been determined, 26 of which could possibly be counted as “anti-Trump”.