After yesterday’s primary in Indiana, both Ted Cruz and John Kasich have dropped out of the race, leaving Donald Trump as the presumptive nominee for the Republican party. This was disappointing to those of us who were hoping for some contested-convention drama, but sensible, since Trump is now virtually certain to go into the convention with the 1237 pledged delegates required to secure the nomination on the first ballot.

At various points during this primary season, I’ve calculated what the delegate counts would have been under alternative allocation schemes. The Republican party uses a process that varies from state to state. In general, the early states tend to allocate delegates more proportionally among candidates, while later states tend to be more winner-take-all. By contrast, the Democratic party uses a uniform method: proportional allocation among the candidates receiving more than 15% of the vote (applied both at the state and congressional-district levels).

Under the actual scheme, Trump currently has about 1013 pledged delegates (plus, possibly, some supporters among the formally unpledged delegates from Pennsylvania). He only needs to win about half of the remaining 445 delegates to reach the threshold, and he would be almost certain to do so, even if Cruz and Kasich stayed in the race. 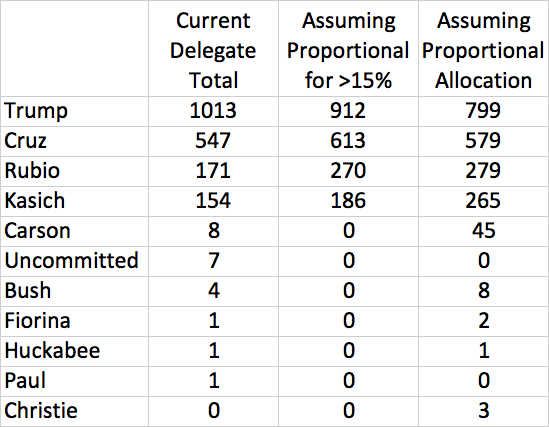 One consequence of (and perhaps rationale for) using winner-take-all allocation in a drawn-out primary season is that it drives out challengers, forcing consensus around the leading candidate and allowing them to begin their general-election pivot earlier.

Another consequence is that a pesky plurality of “voters” can drive the nomination of an openly bigoted narcissist, subverting the ability of the party elite to install one of the usual cryptically bigoted narcissists. That’s a consequence that will either be hilarious to Democrats in November or hilarious to extraterrestrial archaeologists who visit the smoldering remains of our planet thousands of years in the future.